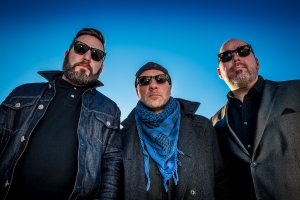 The 2008 birth of MonkeyJunk, the Ottawa, Canada based trio, created an accessible and refreshing blend of swamp-rock roots and blues. In the relatively short time they’ve been performing and recording together, the members of MonkeyJunk have won a collective 20 Maple Blues Awards, two Canadian Independent Music Awards, a Blues Music Award (USA), and have been nominated twice for a JUNO Award, taking home the coveted trophy, often referred to as the Canadian Grammy, in 2012.

MonkeyJunk quickly became one of the most popular new bands on the scene. They performed at festivals and packed venues across the country, amassing a large audience of devoted fans, affectionately called “MonkeyJunkies.” In fact, they hit the road for a tour before their debut album Tiger In Your Tank was even released. They are not a fluke, one-off collective, nor are they “ordinary Joes” who decided to start a band. These are three musicians who individually had established careers prior to forming MonkeyJunk. Steve Marriner, the trio’s vocalist, baritone guitarist, harmonica and organ player, was well known as the ‘go-to’ guy as a producer, sideman and session player. He’s also toured the world performing alongside Harry Manx. Steve is also the consummate musical networker and stage guest having been invited to join many artists in concert such as Randy Bachman, Colin James and Big Sugar. At the age of nineteen, lead guitarist Tony D performed for three nights in Buddy Guy’s band. In 1982, he opened for Stevie Ray Vaughan. These events helped propel him into a long-standing career with his own popular project, The Tony D Band. He has also toured with some of this country’s greatest musicians, including the late Dutch Mason. Before MonkeyJunk, drummer and percussionist Matt Sobb was a very busy session drummer around Ottawa. Over the last 24 years he backed up several regional, national and international artists on stage, touring and in the studio, including Kim Wilson (Fabulous Thunderbirds), Jeff Healey, Tom Wilson (Blackie & The Rodeo Kings, Junkhouse, Lee Harvey Osmond), The Tony D Band, his brother's band Marty Sobb and The Mobb, among many others.

As one of Canada’s heaviest blues rock bands since Big Sugar, their music is passionate and edgy with unfettered delivery. MonkeyJunk’s fourth release for Stony Plain Records, Moon Turn Red, is sure to further cement the band’s popularity. “With each record we make, we feel like we’re pushing more boundaries. Moon Turn Red is no different. I really think some of the songs on this album are some of the best we’ve written,” says Marriner. “We explored grooves we’ve never hit on before, and experimented with some new sounds while paying particular attention to the melodic passages of the songs.” With ten scorching tracks varying from straight-up rockers like “Light it Up”, “You”, “Hot Hot Papa”, “Live Another Day”, “Lucky One” and “Travelin’ Light”, the reggae-tinged “Love Attack”, the funky “Show Me Yours”, to the soulful, goose bump inducing love songs “Learn How to Love” and “Meet Me at Midnight.”

Moon Turn Red features a guest appearance from legendary Canadian guitarist David Wilcox, who plays guitar and sings on MonkeyJunk’s cover of his classic “Hot Hot Papa.” The track was produced by Colin Cripps of Blue Rodeo. “It was a real thrill for all of us to work with David Wilcox as he is someone we have been a fan of for many years - one of our musical heros”, says Sobb. “We listened to his music growing up, have covered his songs in previous bands and still listen to his records in our van while on tour.” He was very generous with his time and talents and it was truly an honour that he was so gracious and genuinely invested in making the track sound great with us. It was great to have Colin on board to produce that song too - his musical sensibility and keen ears really harnessed the best out of all of us!”

Gordie Johnson (of Big Sugar and Grady) also lends his talents to the recording. As Marriner says, “Johnson possesses an acute sensibility for melody and groove, a champion of ‘riff-rock,’ while his role on our record is more supportive than feature, he brought all sorts of vibe to the session that I believe we effectively captured on tape that day.” Tony D adds, “Gordie and I both come out of the blues. We’ve known each other for over twenty five years. It was serendipitous that he happened to be touring in the vicinity of the studio in Almonte, ON and after all these years we finally got a chance to work together!”

Moon Turn Red is not only an outstanding addition to an already impressive body of work and a turning point for MonkeyJunk, it is an example of musical camaraderie and brotherhood; the trio of long-time friends and colleagues just seem to click in a way that is at once natural and otherworldly. Their passion, conviction and dedication to their music is evident with every lick, every beat and every lyric. MonkeyJunk is a reminder to listeners that musicianship, ability and strong song writing always triumph.
34
What's This
Advertisement