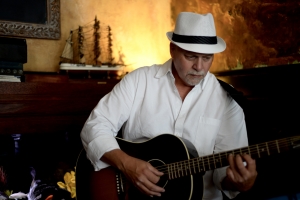 About my new CD "Heroes"

Originally the Album title was going to be Home Again, with that song as the title track. But one day, and I cannot recall exactly when, I began to muse on the lyrics of the songs. Many of them deal with personal heroes that I have had in my life. In fact, the fabric of this record is permeated with them, with thoughts of and appreciation for those men and women living and dead whose words and lives have inspired me to reach for the stars, to strive to become the best me I can be.

Not long afterward, in a dream, I saw the picture of a guitar with the word Heroes written across it using the sound hole as the “O.” When I woke up and began to again reflect on the lyrics of many of the songs, it occurred to me that this was more about the heroes in my life and that should be the title of this album. I told my daughter, Erin Hayes, what I had dreamed and she photographed one of my guitars, and drew the picture that is now on the front cover. What blew my mind, she actually drew the exact thing I saw in my dream. I suppose this was meant to be. We all need heroes in our lives. It is my hope that whoever listens to this record will be inspired to reflect on and appreciate their own personal heroes.

Mitch Hayes is a talented singer/songwriter whose songs will take you on an emotional journey through timeless themes of love and loss, joy and sadness and social consciousness. His music has often been described as Americana with an attitude and is as eclectic as the creative influences that have helped to shape his writing through the years. The listener will hear hints of the classic singer/songwriters, Bob Dylan, Neil Young, Jim Croce, Cat Stephens, and even a little Neil Diamond or Warren Zevon. There will be elements of Folk, Rock, Country, Blues, traditional Bluegrass and once in a while, a bit of Reggae or Jazz.

Being a songwriter means being a story teller and who doesn’t love a good story? Mitch says that what most inspires him to write is “life experiences, either my own or on occasion, those borrowed from someone else.” Some of his songs will make you laugh, some will make you cry, some will cause you to stop and think and some are just plain silly. A Mitch Hayes show is a wonderfully entertaining experience and one that should not be missed.

Mitch was born and has lived most of his life in North Carolina. He says “though I’ve traveled extensively in and outside the United States, I always find myself returning to the Carolinas. Something about the beauty and diversity one experiences from the mountains to the sandy shores of the Carolina coast keeps drawing me back. It’s just home.”
2
What's This
Advertisement