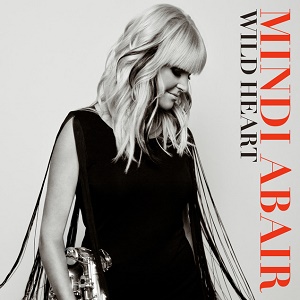 May 27, 2014 release produced by Abair and noted LA trio The Decoders (international release dates may vary)

Mindi Abair is one of the most dynamic performers on the music scene today. In addition to her acclaimed solo work, she was the featured saxophonist on the 2011 and 2012 seasons of American Idol, jammed with Paul Shaffer on the Late Show with David Letterman and joined rock legends Aerosmith for their 2012 summer tour. More recently, Abair received a 2014 GRAMMY® nomination in the Best Pop Instrumental Album category for Summer Horns, a #1 recording with her friends Dave Koz, Gerald Albright and Richard Elliot, four of the most pre-eminent saxophonists in contemporary music.

In a career that spans seven solo albums and countless collaborations in the studio and live on stage, Abair has made her mark on a broad stretch of the musical landscape that includes jazz, pop, rock, R&B, soul, funk and more. The powerhouse saxophonist/vocalist has made scores of friends along the way and earned the respect of top-shelf artists representing every one of the aforementioned genres.

Several of those friends join her on Wild Heart, her new album that includes guest performances by – and songwriting collaborations with – Gregg Allman, Joe Perry, Booker T. Jones, Keb’ Mo’, Trombone Shorty, Max Weinberg, Waddy Wachtel and others. Produced by Abair and the illustrious Los Angeles production trio The Decoders (Adam Berg, Itai Shapira and Todd Simon), Wild Heart is set for release on May 27, 2014 on Heads Up, a division of Concord Music Group.

“I’ve had all these friends in rock ’n’ roll and pop for so many years. I’ve been a part of their music and careers, but I never quite knew how they could fit into my career,” Abair says. “I’ve worked hard to write songs that had more of an organic spirit about them – a little more rock and roll, a little more soul and a lot more abandon.”

By enlisting colleagues in rock and pop circles in the making of Wild Heart, Abair has created something that stretches her beyond the contemporary instrumental groove that has characterized some of her earlier recordings.

Wild Heart is all that and more. The 11-song set opens with the upbeat “Amazing Game,” a track co-written by Abair and GRAMMY®-winning songwriter Jim Peterik, the latter a pop/rock veteran who penned the Ides of March hit single “Vehicle” in 1970, and later Survivor’s “Eye of the Tiger” in 1982. “Amazing Game” also features swaggering horn lines courtesy of Trombone Shorty, the New Orleans native whose past alliances have included Lenny Kravitz and Aerosmith.

“Amazing Game” is the first of two songs on which Peterik and Abair share writing credits. The second is “Train,” a thumping track that showcases Abair’s powerful vocals alongside her solid saxophone work. “Jim and I have written so many songs together, and I’ve recorded with The Ides of March and on his records. It’s an honor to put our songs on my record for the first time. We had such a blast writing them.”

The scorching instrumental “Kick ****” features rock icon Joe Perry, guitarist and co-founder of Aerosmith. “I wrote this song with my friend Matthew Hager, and while we were demoing it, I was fresh off the Aerosmith tour and picturing Joe Perry rocking the guitar part while walking down the runway towards 50,000 fans with the wind in his hair. I had to call him to see if he would play on it.” Perry heard the song and joined Mindi in the studio the next week to record it. “What a high to play back and forth in the studio with one of my favorite guitarists of all time. When Matthew heard it, he just about fell off his chair!”

“I’ll Be Your Home” is a swampy ballad that features Keb’ Mo’ in a vocal duet with Abair (Keb’ also plays guitar and tambourine on the track). Abair says, “Keb’ and I have been playing on each other’s records for many years. We started playing together in LA clubs when maybe eight people would come to see us. We were nobody at the time. So it’s been fun to watch his career take off in the years since and be a part of each other’s lives and music. He’s one of my favorite human beings and musicians, and he adds a lot of home to this song.”

“The Shakedown,” a throwback to the beginnings of rock ’n’ roll when the saxophone was an integral part of the sound, features guitarist and co-writer Waddy Wachtel, along with drummer Max Weinberg, the anchor of Bruce Springsteen’s E Street Band for nearly four decades. Abair established a connection with Weinberg shortly after the death of E Street saxophonist Clarence Clemons in 2011. A few tour dates with Weinberg – including a benefit concert that included an appearance by Springsteen – played a huge role in the genesis of Wild Heart. “Max means every note he plays,” says Abair. “Playing Clarence Clemons’ parts with him and Bruce made me delve deeper inside myself – just go for broke and let everything out. I wanted that abandon for my record.”

The understated and slinky “Addicted to You” features keyboardist Booker T. Jones, leader of the highly influential Booker T. and the MGs, the de facto house band for the Stax label during their heyday in the ’60s and early ’70s. “Booker is such a hero of mine,” says Abair. “Here’s a guy who really invented a sound and changed the world. I wanted the chance to write with him – I just knew we could create magic. I knew we would write something meaningful, and this song absolutely haunts me.”

The set closes with “Just Say When,” a heartfelt ballad that harkens back to keyboardist and co-author Gregg Allman’s roots with the Allman Brothers. “It was actually Gregg’s idea to write something together,” says Abair. “I went to his house for three days to write with him, and we bonded so much and delved deep to come up with this song. I played with him last year and felt this electricity singing and playing with him. He’s all heart and vibe. What a gift to have him write, play and sing on this record.”

Wild Heart is, in many respects, Abair’s culmination of many years of collaborating in the studio and/or onstage with some of the most prominent figures in contemporary popular music. “People look at me a bit funny when they see the extreme diversity of artists I’ve toured or recorded with – Teena Marie, Aerosmith, Duran Duran, Lee Ritenour, Keb’ Mo’ and The Backstreet Boys. I always went with my heart, and it’s been quite an adventure musically. No title accurately described the music from this record to me, so I decided to title it after myself, a Wild Heart that’s had a great time letting go and letting this record take shape organically with people I love. I hope people have as much fun listening as I’ve had making this music.”