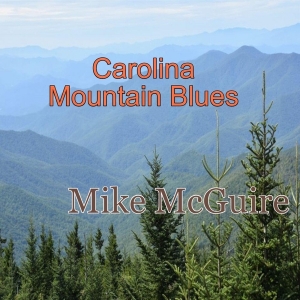 
Americana singer-songwriter Mike McGuire travels a land of heavy weather, echoing church bells, sad tales and long memories. But he never lets go of the one thing that binds us together: Faith, in ourselves, in our future paths, in our country. It’s something that adds a sustaining power to Beyond the Ark, even as McGuire deals with a number of damaging emotions.

That starts with a creeping dread on the opening “Cumberland River Blues,” as McGuire crafts a series of devastating images in the wake of Tennessee’s recent flooding disaster. He sings with the weary acceptance of early Bruce Springsteen -- even as Phil Stirgwolt answers, phrase for phrase, with a plaintive dobro. “Twelve inches of rain in 48 hours; Mama light a candle, we ain’t got no power,” McGuire sings, with every word sounding like a requiem. “Wrap the baby in a blanket, we’ll climb in this canoe. The Cumberland River’s angry and there ain’t nothing we can do.”

“Charlie Poole,” a tender memory of a town scallywag, boasts a similar mixture of Springsteen character sketches and plucky mountain riffs. Stirgwolt again serves as the centerpiece accompaniment to McGuire through a plucky mid-song picking session. “Nobody Says Nothing (Quite Like You)” adds a rattling beat from drummer Mike Alger and bassist Rico Thomas, as McGuire tells a clinched-teeth tale of quiet recriminations. An itinerate rhythm gives the tune a pleasant country-rock feel, even as McGuire delivers some of his most stinging putdowns to a distant lover.

The lone cover tune here is “Twilight,” a 1975 single written by Robbie Robertson for The Band, and it retains the original’s half-lit sorrow. As McGuire makes the song’s familiar plea (“don’t leave me alone in the twilight; twilight is the loneliest time of day”), Stirgwolt switches to a distant, particularly rustic harmonica. Robertson’s lyric fits so snugly into the broader atmosphere of McGuire’s Beyond the Ark, the uninitiated might not even recognize that “Twilight” was written by someone else.

McGuire then takes the passing military imagery of that song (“a young man serves his country, while the old man guards his home”) to its logical conclusion on the subsequent “Military Time.” As a young recruit begins his journey into the service in Iraq, learning hard lessons along the way, McGuire’s band echoes the lock-step conformity required of such sacrifice. Scott Kiper adds a crunchy lead guitar, amid a snapping rhythm, and Mike Schroeder takes over for a few well-placed frenetic runs on the mandolin.

“Roses for the Moon” moves back into the easy gait McGuire first established on Beyond the Ark, but this time he adds a flinty romanticism that recalls Warren Zevon. As Schroeder moves to fiddle, giving the track a dirt-road authenticity, McGuire pulls one of the laconic lyrical twists that made Zevon’s work so compelling: He travels all night to make a grand gesture to a girl, only to find himself arrested and alone.
Kiper matches McGuire lick for rueful lick on the subsequent Katrina-themed “Leaving New Orleans” which, instead of the expected happy-go-lucky Acadian stomp, returns to the sweeping portent of McGuire’s initial track. Dashing out ahead of the gathering hurricane-force winds, and amid a lugubrious signature from keyboardist David Taylor, the Crescent City quickly becomes nothing but a fading rearview speck. Just then, though, as McGuire surveys a truck filled to the point of tipping with all of his earthly belongings, he hedges a bit: “I’m leaving New Orleans … but I’ll be back … I hope!” He can’t, he won’t, give up.

On “The Streets are Quiet on Christmas Day,” McGuire offers a delicately wrought lament for the wider meaning of the holiday shared after the echoing excitement of tearing into presents has faded. Mike Cecil’s steel guitar then gives an old-time country feel to the closing “I Count the Days,” which finds McGuire studying hard to divine just how much longer he will be away from his true love. Even as he struggles with a forlorn mood, he can’t help but be aware of how common these feelings are, and he gains a sense of community in that shared longing. “In the morning,” he plaintively sings, “I’ll be waiting at the airport with all of the other people who are leaving.”

A glint of empathy, and of hope, shoots through even the quietest, saddest moments on Beyond the Ark, and that’s what makes it special.

There is a strong spirit writing these songs. They move hearts and touch souls. This is the kind of music that made me pick up a guitar and struggle with three chords and my own thoughts and feelings. I’ll be playing this one for a while, and gleaning all I can from it. Whether you are a picker or just a music lover, I strongly suggest you check out Mike McGuire.

Mike McGuire writes from the heart; a heart worn by the weariness of the world, but inspired by faith in humanity and in a better day. The Kentucky-based singer/songwriter has a folk flair, infused with blues and Appalachian influences. Comparisons to artists such as Bob Dylan,JJ Cale,Sam Bush and John Prine would be accurate but don’t let the labels fool you; there is something "fresh and alive" in McGuire’s earthy voice and songwriting presence.

Review
This is music for those in the heartland made by those from the heartland and, as such, it strikes right to the heart, but please don’t ever misconstrue these jams as simple, because there’s more here than meets the eye" ~ Andrew Greenhalgh
"McGuire touches on universal truths through personal narration, and the stripped down arrangements keeps him in an elemental range, with the focus on adeptly crafted lyrics, don’t overlook the music, however, there’s a quiet brilliance in McGuire’s creations, 'Southern Attraction' has universal appeal" ~ Wildy Haskell