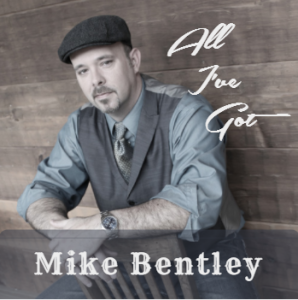 MIKE BENTLEY is from the mountains of Eastern Kentucky, and was exposed to music and singing early on in life. He began singing at a very young age, and like many folks in the mountains, learned a lot from singing in church. Being raised in a hollow in Pike County, learning to sing and play bluegrass music seems only fitting. Mike is quick to tell anyone that his favorite singer is Keith Whitley, but he is also partial to singers such as Larry Sparks, Dave Evans, Marty Raybon, George Jones, and so many others. His musical resume includes being a member of bands such as Dismal Pike, Allen Amburgey and the Kentucky Mountain Grass, and Ernie Thacker & Route 23, just to name a few. Mike writes a lot of original tunes and takes great pride in his songwriting, as well as his vocal and instrumental parts with the band. His songs have been recorded by some very familiar names in bluegrass, such as Grasstowne, Lonesome River Band and Lou Reid and Carolina. Since beginning with Cumberland Gap Connection, Mike has continued to help define the band's sound with his vocal work and songwriting. Doing a solo project has been a life long dream of Mike's and he is very humbled to be joined by the talented musicians on the project as well as producer and good friend, Alan Bibey. He hopes you will enjoy ALL I'VE GOT as much as he did creating it with this amazing group of people.

"I've been a fan of Mike's singing for a long while now and I think this project will help him take his rightful place among the very elite singers in this music that we live and breathe. Mike is the real deal! Great job Mike!"
Alan Bibey

"Mike Bentley may be an unfamiliar name to some in Bluegrass circles, but I predict that won’t be the case after this project hits. His warm, mellow baritone is a perfect fit for many of today’s bluegrass songs, and with “All I’ve Got” he has produced a true winner."
Tim Stafford
15
What's This
Advertisement