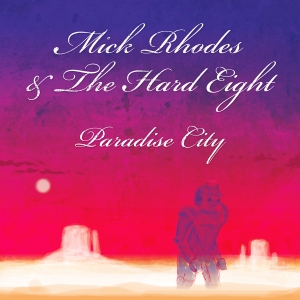 Claremont, CA November 23, 2015—Formed in 2007, Mick Rhodes and the Hard Eight released their debut album, ‘Til I am Dust, in 2011. The band’s follow-up, Paradise City, produced by Wyman Reese (Dave Alvin, Chris Gaffney, The Lonesome Strangers), will be released January 23rd, 2016 on Hot Tramp Records.

Whether playing to a crowd of thousands, or a club audience of 50, MR8 have a dynamic way of turning each venue into arena show. After 5+ years together the band is well-seasoned, and, as Rhodes describes it, “We are pretty much finishing each other’s musical sentences.” ‘Til I am Dust was recorded unrehearsed, in the studio, without the benefit of working on the songs in a live setting. With the new record the band had the luxury of living with and arranging the songs that comprise Paradise City.

Front man/songwriter Mick Rhodes got his start in Los Angeles’ punk scene, forming Human Therapy in 1980. And while his roots lie in the punk milieu, his influences have always been diverse. “My tastes go back to the roots of rock n’ roll - blues and country music - and on forward to raw, early rock ’n’ roll, ‘70s AM pop, glam and, of course, punk,” he said. “I was really kind of stuck on writing in the punk form until I happened on a Randy Weeks show one night about 15 years ago. I heard what he was doing and it changed my thing overnight.”

Rhodes’ songs mix it up with country rock and end up in a place where lush three-part harmonies co-exist with raucous fuzz guitar and the woody punch of a mandolin. M Music and Musicians Magazine said, “Mick Rhodes jumps genres like a kangaroo navigating the Outback, yet consistently creates great tunes.” Rock NYC calls MR8’s sound, “ … West Coast and Texas at the same time … from heartland rock to Americana to honky tonk.” The common thread through Rhodes’ songs is that they are played and sung with feeling. It’s just pure, honest, un-focus-grouped music.

Professing a “major power pop weakness” and a love for storytelling, it’s no wonder Paradise City kicks off with Rhodes’ infectious “Married Girls,” a song inspired by a powerful, wonderful, but destructive love. “Since You” was written for Rhodes’ son as he was in the pediatric ICU. “I was imagining how wonderful the world would be if he made it out of there alive,” said Rhodes. “He did. And it is.”

“Last Summer” was penned while Rhodes’ grandfather was in hospice care. “It was a long journey,” he said. “He was 96, and it wasn’t beautiful or dignified near the end of his life. This song is a wish for a better end for those we love.”

“That Kind of Love” concerns the redemptive and destructive power of love, set in the California desert, where the song’s two lovers are “free to be together, far from the prying eyes and broken hearts of home.” “Don’t Remind Me” is a country weeper about paying the freight for said broken heart.

The rocker “Keep it Simple” is an ode to California summer, while “Under the Bustle” reveals the flip side of that SoCal idyll.

“Whisky Girl” is a Southern Gothic tale of love and betrayal. The syncopated stomper, “Heavy Metal Heyday,” was inspired by show MR8 played to a house of aging metal heads. And “Go to the Love,” which concludes the album, is a hopeful, 4-minute love letter to our better nature.

“Our music straddles the lines between pop, country and rock, spilling over in varying degrees from song to song,” Rhodes observed. “My hope is to find a larger audience that appreciates our honesty … Y’know, we do this for the joy. The biggest rush for me is taking something from my own life, sending it out to the world, and seeing it resonate. It’s why we keep doing this.”

“My goal with this thing is really just to keep it moving forward, for us and our audience … to continue making records and touring, and making new friends along the way.” Rhodes said. “If we can keep the momentum: the joy, keep writing stuff we love, and have places to travel to and make our noise, then it’s a win.”

Mick Rhodes and the Hard Eight walk on the country rock side of Americana, almost as if Dan Baird and The Bottle Rockets were having a discussion about California Country. Paradise City is made up of songs that speak to the human condition, and the music to each song changes to seamlessly fit the mood.