MICK HAYES -MY CLAIM TO FAME 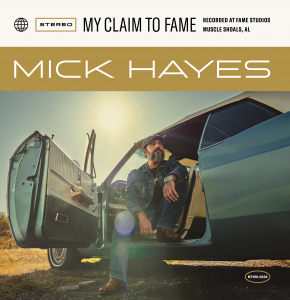 Mick Hayes is a published songwriter, accomplished singer and guitarist who’s been on the Grammy ballot more than once and in a number of different categories throughout the course of his career. His interest in music starts in the blue-collar town of Lackawanna NY, a suburb of Buffalo which was once the center of steel manufacturing throughout most of the 20th century. This paints a picture of seven-year-old Mick Hayes who was given a guitar, some hand me down records and learned the meaning of the blues very quickly when his parents were divorced that same year.

“I’d say that music kept me balanced in those years. We lost our home, moved from town to town, lived in a trailer park for a while, mostly we lived in upstairs apartments and impoverished neighborhoods. Basically, we lived on government assistance in those days and by the time I was thirteen I think we moved like 5 or 6 times. The only thing I remember keeping was my guitar and my hand me down records.”

In his mid-teens, Mick was working by day on cars during summer break and performing in smoke filled bars for the standard musician wage by night. Not too long after that he graduated to regional shows in New York, Pennsylvania, Ohio and Canada. By the time he was in his early 20’s he had established himself as a full-time musician and took his newly formed band around the country, eventually relocating to Georgia to explore the southeast region. However, after a few years of industry struggles Mick found himself without a band or a place to live.

“Those last few shows in Georgia were some of my worst, thank God we didn’t have smartphones and social media back then. I was completely fractured on stage almost every night. I was sleeping on peoples’ couches, had a bunch of regrettable nights, passing out in the booth at Waffle House, sleeping in my truck, singing on the streets in desperation and almost got arrested for trying to live in a heated storage unit. Jokingly I would say that I was going to eventually return home to live and die on the same stages I grew up on. It was a very dark time that I still haven’t written a song about…one day.”

After all those years of trying to “make it” in the music industry, releasing ten albums of original material, thousands of shows, a handful of reality TV show appearances and a few misguided management contracts, the Mick Hayes we know today emerges independently! After starting his own record label in 2019, Mick released a brand-new record to glowing reviews that was recorded in only 5 days at legendary FAME Studio in Muscle Shoals Alabama and cleverly titled MY CLAIM TO FAME. In the first two months of its release and during a global crisis, the album has received airplay in almost 20 different countries and Mick spent three weeks on the road promoting it by visiting independently owned record stores, music shops, folks at Gibson guitars and more all the while documenting this journey introspectively in cooperation with American Blues Scene magazine.

“I spent nearly two years preparing for the release of MY CLAIM TO FAME and it was recorded in the place where you get your Master’s Degree in Southern-Soul Music. From the deep grooves of the in-house band to the analog groves of the vinyl record MY CLAIM TO FAME is just that! People have been saying that this could be the worst time in history to release music, I think it’s the best time in history to get folks to listen and experience it the way that we all used to. Listening used to be ritualistic and that’s why I branded my record label with: Return To The Ritual.”

With no sign of slowing down, we are reminded that “Hayes” means descendent of fire. How apropos.
Advertisement