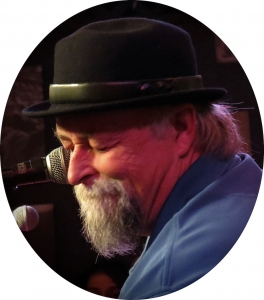 The Missouri Ozarks is both home and backdrop to Mick Byrd, Missouri Arts Council Touring Performer and MO Blues Society, & TSAI member, who has performed at Nashville’s legendary Bluebird Café for over 20 years. An award from Billboard Magazine kicked off his music career in 1994. Eleven recordings later, Mick brings fans an amazing array of original Roots Rock, Country & his signature “Ozark Blues”. Whether performing with The Backroad Band or touring solo, Mick brings audiences a snapshot of life in the Midwest with warm, powerful vocals and finger picked guitar.

THE LONG BIO
I was born a long time ago in the doctor’s office in Vienna, MO, and except for my college years, I have been here ever since. I think it is important in music and in life to have roots. The wild and beautiful Gasconade River, lots of deep woods, and the home folks - all of them suit me just fine. After I graduated from high school and went to college, I decided I wanted to do something both enjoyable and purposeful for a living - so I chose teaching and coaching. I taught primarily history for 31 years at Vienna High School. I retired in May, 2021 after 40 years of coaching. It was a dandy gig.

Music has always been a big part of my life. My Dad played at night in the Kansas City hotel bars in the 1930’s and came from a very musical family. When I was 9 years old, I got a plastic guitar for Christmas. My sister, Vicki, who knew a little about music ,tuned the 6 strings into a complete chord, so I could play all six strings at a time with my thumb between the frets. It sounded like music to me. When I was 13, I got my first real guitar - a hollow bodied electric with a small amp. My parents, I am sure, thought the amp was too big as I thundered away in my bedroom or basement. My Mom was very much into crafting. One day, when I was home by myself, I decided to set up and play in our small dining room. Evidently, the good vibrations from “Smoke On The Water” being played at a volume level of 10, were a little too intense for my Mom’s newly created, multi-colored ceramic bird. Its head popped right off! That day ended poorly.

During high school I wrote songs & played at school functions and where ever I had the chance. During college, I and several of my musically inclined buddies founded JADE, my first real band. We did a mixture of cover tunes and originals, learned a lot & had a bucketful of fun! After college music went on the back burner for a number of years, except for writing songs. I have always loved to write songs. In 1994 I wrecked my knee playing basketball. During a long, laborious rehab I decided I wanted to be a serious musician, as if anything that brings as much fun to me as music does, could ever be considered serious. With the help of my awesome wife, and bigtime songwriting critic, Debbie, I released my first CD, No Frills, in 1995. Debbie is absolutely indispensable to our music business. I am the music. She is the business.

In the beginning I wrote and performed a lot of Folk Rock, Americana tunes. Mostly introspective, most were pretty deep, at least from my perspective. We were fortunate enough to win a National Songwriting Award from Billboard Magazine for “Afternoon at the Wall,” one of the tunes on No Frills. That gave us some validation, some purpose, and a great deal of satisfaction.

As the years have gone by my music has progressively moved toward my roots. “Ozark Blues,” my signature style, is, in my mind, the crossroads where Roots Rock and Roots Country meet the Blues. It is the culmination and synthesis of all the music I have heard and played in my lifetime. I hope you enjoy listening to it half as much as I enjoy playing it.

SONGWRITING
I don’t ever really think a song. I feel a song. I am not much of a tinkerer. When the song is done it is only tweaked if playing with the band makes a change sound or feel better. If it feels like work, I stop. It just isn’t time for the song to be born yet. I tend to write songs in bursts - maybe 3 or 4 in a span of 2 or 3 days. Then, maybe I won’t write a song for a week or several. Whenever I feel like I have a keeper I go play it for Debbie. If it passes her litmus test it is probably good. Sometimes she has a suggestion that makes it even better.

PERSONAL
I have two old trucks, an old johnboat, an old boat motor, an old dog, an old fishing rod, and some experience with all of them. I am a wood hippie at heart. Sitting still and watching it get dark in the corner of some Ozark forest is a well spent evening for me. I love baseball, basketball, kids, a great guitar riff and any singer who means what they sing.

MUSICAL INFLUENCES
It would probably be easier to list the types of music that have not influenced me and it would be a short list. I think the music I write and play is a natural by-product of every song I have ever heard - classic rock, old country and deep river blues - they are all in there somewhere. The best songwriting advice I ever got was from awesome Nashville session player and songwriter Dave Kirby, back about 1994, “Get a shorter pencil, Mick.”

MUSICAL GOALS
“It is not the fame that I don’t have nor the fortune I’ve not made. It’s just the smiles on people’s faces and a few good tunes well played.” - A Few Good Tunes ℗2004