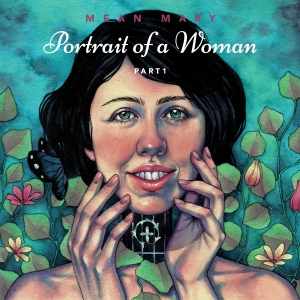 Alone is quite literally Mean Mary alone. The 10 original songs, recorded in her home studio in Nashville, are stripped down to a minimal production of just her voice and an instrument. Leaving her other instruments aside, Mary opts for either a lone guitar, a banjo, or a banjitar (a combination of the two). Her straightforward yet dramatic arrangements highlight the personal songwriting and natural depth of her voice. Since Mary often tours as a solo artist, she describes this album as “a live performance with no applause … just silence and the next song.”

Songs about life on the road (Come Along and Big Tour Bus) gently meld into songs from Mary’s childhood in the rural parts of Florida (Another Barefoot Day and We Never Hear the Song). There are songs of trial and triumph (I Can Be Brave, Sparrow Alone, and What About Today), and she gleefully presents her fun side while taking liberties with traditional tunes. She turns the well-known bluegrass song, Nine Pound Hammer, into an original blues song titled Nine Pound Banjo and makes the old folk song, Cindy, her own with flirty new lyrics and a jazzy romp of a tune. In her Bonnie and Clyde inspired story-song, Breathless, Mary unapologetically sings about the darker side of life and completes the album’s roller-coaster of raw and real emotions.

Performed and produced by Mary James