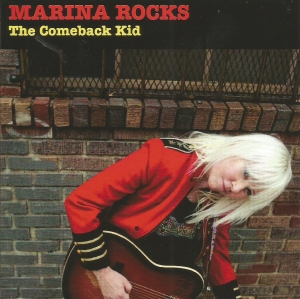 
The First Single "Stuck in The Mud" was a finalist @ 2013 KERRVILLE NEW FOLK SONGWRITER'S COMPETITION. It's from the New Album-"Comeback Kid" THE TITLE TRACK.."COMEBACK KID WAS ALSO A FINALIST.

IT'S been a busy year for marina rocks...Finalist @ Kerrville Songwriting competition where 750 writer's submitted 2 songs each, 1st place winner @ 106.9 "The Ranch" songwriter's competition & 1st runner up @ Larry Joe Taylor's competition where later she met one of the judges...the very cool Jessie Scott who booked marina @ Hill Country Live in N.Y.City & Wash. D.C. for a 9/11 show.marina's latest single "Stuck in the Mud" w/Lloyd Maines on dobro/banjo is now making airwaves on European radio. Lloyd plays on a tot. of three songs on this new album.

ALL songs are FCC Friendly except "John Wayne" the word Punk might be confused w/the F bomb.

BIO: Does size matter? Dynamite comes in small packages, and marina is a little blond chick that weighs in at a mere 100 lbs.plus tax. The size that matters here is the size of marina's heart-it is as big as Texas (which happens to be her born & raised home state) Her super-sized heart beats in the chest of a young woman on a mission to open your mind and rock your world.

John Mullins of SESAC says..."She"s Americana with an edge.
Born in Austin,Tx. during a summertime heat wave, she arrived in this world smoking and she has never cooled off. Her mom who still lives in Austin,bought marina her first guitar and she played till her little kid fingers bled- and then she played it some more!
When marina turned 12 or 13 her mom bought her a Marshall Stack instead of a party dress.It's not in marina's makeup to quit,& her persistence and resilience has paid of in fiercely loyal regional following.

In response to popular & persistent fan demand, marina has put together a new album. Yes size does matter & sometimes smaller is bigger.