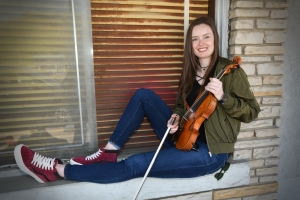 Maddie Denton is a third-generation fiddle player from Murfreesboro, Tennessee who began playing at the age of five. She is the 2016 Grand Master Fiddle Champion, the first Tennessee-born contestant to ever win, plus the 2009 National Junior Fiddle Champion. Since 2008, Maddie has won fourteen state championship titles spread over the states of Alabama, Kentucky, Indiana, Georgia, and Tennessee. She is an accomplished tenor guitar player and frequently backs up her fellow competitors. Maddie also plays mandolin and standard guitar. In addition to her love of contest fiddling, Maddie also enjoys playing a broad range of fiddle styles, her favorite being bluegrass. She has made appearances in the Dan Tyminski Band, as well as the Theo and Brenna Band, East Nash Grass, and Modern Tradition.

Aside from music, Maddie played NCAA Division I college golf at Middle Tennessee State University, where she earned a degree in Organismal Biology and Ecology. She currently teaches Biology and Environmental Science at Siegel High School, where she is also the assistant men’s and women’s golf coach.
7
What's This
Advertisement