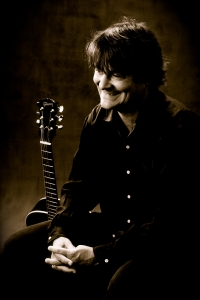 Backyard string bands to riverside hymn-sings, Mark Lucas grew up deep-grain Kentucky. One grandmother sang Appalachian ballads; the other played ragtime piano for the silent movies. He took up piano under the spell of his father's Ray Charles record; got serious about guitar after Dylan's John Wesley Harding; was all the while collecting Stax 45s and learning soul horn parts.

He played folk and country in the acoustic duo Lucas & Graham in his twenties. Then he was part of the roots group Billyblues for ten years and four albums, performing Americana originals and opening for the likes of bluegrass legends Jim and Jesse.

In 2008 he went solo and set out to make an LP whose personal passions would be embodied in a cross-section of the American past. Two albums' worth of recorded material later, he drew together the thematically related songs that comprise his solo debut, Dust. The follow-up, Cathead Biscuits, will release in 2011.