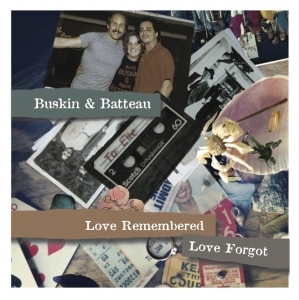 We’re over the moon about our new CD, Love Remembered, Love Forgot. It’s got seven new songs, two older ones we’ve never recorded, and three previously recorded songs given new – we think definitive – treatments. It’s got guest appearances by our friends Tom Rush, Jonatha Brooke, Krista Detor, Pat Wictor, Trina Hamlin, Eric Schwartz, Yani Batteau, and Sophie Buskin. It’s got a dee-vine rhythm section: besides our third arm, percussionist Marshal Rosenberg, there are Jeff St. Pierre (bass), Kevin Barry (guitars), and Corey Schreppel (drums). It was lovingly produced by Neale Eckstein at Fox Run Studio. We took our time about it (a year +), followed hunches, listened, went
back and tried different sounds, added songs, dropped songs – you know, the way it’s supposed to be: “Don’t give it to me Tuesday, give it to me good.”

"It was such a treat to sing with David Buskin again.
Like coming home. He and Robin still have the instinct
for the killer hook. And the break-your-heart story line.”
– Jonatha Brooke
“Buskin and Batteau never fail to astonish me — and I mean that in the nicest way.” – Tom Rush
0
What's This
Advertisement