Little Caesar and the Consuls - The Music of My World 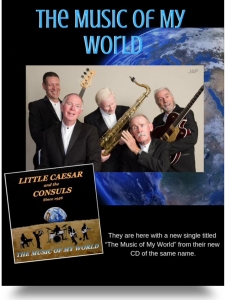 New Album Release
The longest running Rock & Roll Band in Canada, Little Caesar and the Consuls have been Rockin' since 1956. With they're New Album "The Music of My World" there doesn't seem to be any end in sight!
A re-release of they're 60's hits "Hang on Sloopy"
featuring some of the Caesar Alumni and "If...I Found a New Girl" as well all New and Original Tunes
that round out the Album with the tone of moving forward within the flavor of Nostalgia.