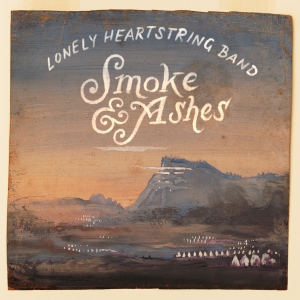 To make a new tradition, you must first know the old one well. Respect it. Worship it. Become it. Then, break free.

“It’s critical to us that we start from a really developed traditional sound, then break all the rules,” says Patrick M’Gonigle. The fiddle player and harmony singer for the Lonely Heartstring Band is home in Boston, reflecting on Smoke & Ashes, the group’s anticipated new album. “Our new record is totally not bluegrass,” McGonigle says. “But all of us are obsessed with being really good at the traditional sound so that we can be more effective when we move away from it––so that we can move with real intention and a sense of direction.”

That confident sense of self and purpose has propelled the young Lonely Heartstring Band’s recent rise. The 2015 IBMA Momentum Award pegged the group early as one to watch, but then M’Gonigle, guitarist and lead vocalist George Clements, George’s twin brother Charles on bass and harmonies, banjo player Gabe Hirshfeld, and mandolinist M. Witler sailed past those high expectations with Deep Waters, their 2016 debut album. Those dynamic recordings and blistering live shows took audiences on joyrides through classic bluegrass and folk––but with subversive twists. Listeners were challenged and delighted.

Smoke & Ashes takes the group’s musical experimentations even further, and announces the arrival of a band which isn’t just genre-bending––they’re creating a wholly new sound. Poetic depth, 60s pop, blues-inspired grooves, and more tease out exciting textures from the band’s bedrock bluegrass foundation. “We can’t help but be a cumulative experience of our musical tastes,” M’Gonigle says. “We love pop music—all of us. And the Beatles, of course. That’s our common ground.” He points out that George Clements loves sweet crooners such as Paul Simon and James Taylor; so does Charles, who also sits in to play classical masterpieces with the Boston Symphony Orchestra regularly; Witler grew up listening to “the pop country we’re all supposed to hate,” M’Gonigle says with a laugh; Hirshfeld is devoted to bluegrass; and M’Gonigle, who grew up playing classical violin, fell hard for classic rock and Radiohead.

All five members of the Lonely Heartstring Band studied at elite musical institutions: Berklee College of Music, the New England Conservatory, and/or the Manhattan School of Music. M’Gonigle and Charles Clements earned master’s degrees. “A lot of people in music school are there because they need to satiate this curiosity, and that’s us for sure,” M’Gonigle says. “Before Berklee, I was running up against walls musically all the time. I could feel there was something musically beyond the wall, but I didn’t have the intellectual and technical capability to figure it out yet. I think we all felt that. Music school can liberate you.” The Clements brothers, Witler, Hirshfeld, and M’Gonigle emerged speaking the same language while retaining their distinct stylistic leanings and passion for roots music.

Produced by Lake Street Dive’s Bridget Kearney, Smoke & Ashes puts that ideal blend of common ground and diverse directions on ferocious display. “Reverie” is the album’s bold opener––a defiant flag in the ground that proclaims new territory has been explored and embraced. Haunting solo piano introduces the track. “That warped piano sound immediately smashes your expectations, if you have any,” M’Gonigle says. “The first five seconds of the record presents people a blank canvass––prompts them to think, ‘I have no idea what this record is going to be now. I’m not hearing banjos and fiddle.’ It became a symbol of the centerpiece theme of the record.” Sweet but foreboding harmonies layered over anxious but beautiful strings sweep in after the piano, which, as the only piano on the album, brilliantly serves as a both a harbinger and an outlier.

“So Low” is a delicious example of what the Lonely Heartstring Band does best: create music that appeals to music fans and music makers, equally. Written by Charles Clements, the song swings through a rock-and-roll groove and sing-along chorus. The song’s standout fiddle solo begs the question: how did the band capture such animated, virtuosic turns on an album? “We all played live, with George singing,” M’Gonigle says. “We’d run the songs down, solos and everything. I took three passes at my solo on ‘So Low,’ just experimenting, but the first one is the one we kept.”

With such musical prowess, the group could skate on lyrics and still soar––but they don’t. Song after song offers lines as thought-provoking as the playing. “Only Fallen Down” exudes the hope that courses through the album in the face of darkness that threatens to overwhelm. With aching strings and harmonies, “That’s the Way It All Began” winds through an intimate history. “Borderland” offers a clear narrative about yearning for more––and getting it.

Probing “Last Refrain”––also penned by Charles Clements ––asks hard questions about where religion and spirituality intersect, without offering answers. Urgent mandolin sets the unsettling tone in “Just a Dream” as layers of perspective are peeled in search of grounding truth. Plaintive “Redbird Flies” seeks comfort, while “In Time” explores the restlessness of waiting.

M’Gonigle and George Clements wrote the album’s gorgeous title track. Brimming with sadness and longing, “Smoke & Ashes” bemoans what’s gone and urges recapturing or rebuilding it. “It was right around the time that the Syrian War was getting a lot of coverage,” M’Gonigle says, remembering what prompted him to write. “There were gas attacks and images coming out of refugees on foot and in boats––and the little boy, dead on the beach. Syria looked like the surface of the moon. The song moves from humanitarian crises into imminent environmental catastrophe. To me, the chorus is about trying to bring people back to these places they’re fleeing, not just physical places, but also, states of mind.”

“The Other Side” grew from a groove the band created together. M’Gonigle and George Clements sat down again to pen the sobering lyrics, written around the same time as the 2016 elections in the U.S. “We were feeling a bit like, ‘Uh, is the world completely disintegrating outside right now?’” M’Gonigle says. “We’re aware of the seriousness of the time we live in, but we’re also young. We’re not ready to give up hope that there is potential for beauty. There is a duality to this record: a light and dark to all of it.” Driving strings evoke that enduring light that will never stop combatting darkness––an epic war mirrored in the lyrics.

In the end, M’Gonigle and his bandmates hope Smoke & Ashes meets listeners where they are. “I find my favorite records are the ones I can put on if I’m feeling super blue and down, and they make me feel better; but then, I can also put them on when I’m feeling on top of the world––the same record is for both of those moments,” M’Gonigle says. “To me, that is what music does. It brings you what you need. Whatever people need this record to do for them, I hope it does.”
20
What's This
Advertisement