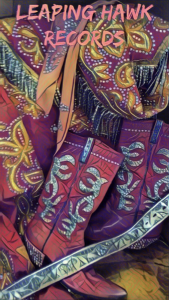 Leaping Hawk Records is proud to present one of the founding members of The Kendalls, Grammy Award winner, Jeannie Kendall and Carl Acuff Jr. to our Record Company. Jeannie along with Royce Kendall, her father; rose to fame with several number one hits, including "Heavens just a Sin Away." The vocal blending of this Father Daughter duo was perfect and never needed tuning in any studio. Their love for God, Country, Family, and Music came through in their voices and created something that only occurs with family vocal timbre, and is almost impossible to recreate. Carl Acuff Jr. adds that same timbre and harmony qualities to compliment Jeannie Kendall on their new release "Island In The Kitchen" written by none other than Jerry Gillispie [writer of Heavens Just A Sin Away"] and Dan Willis. Jeannie's powerful, sweet, clear voice is as strong today as ever and has found a good vocal match with the amazing harmonies of Carl Acuff Jr. an established performer in his own right. This song will carry you to paradise, and dancing around your own "Island in The Kitchen."
3
What's This
Advertisement