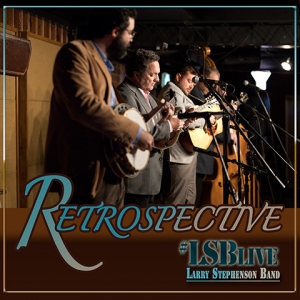 Retrospective (LSB Live) Album by Larry Stephenson Band
Nashville, Tenn. (July 2, 2021) – The Larry Stephenson Band’s digital album release of “Retrospective - LSB Live” is hitting music outlets with a bang today just in time for the big July 4th weekend. This unprecedented new album celebrates the outstanding achievements of the band’s 32-year performance career. The remarkable compilation of songs was recorded live over the past 30 years at the band’s shows at both indoor and outdoor music events. This exciting new project from the Whysper Dream Music label features the various band groupings that have lent to the band’s success over the years.
"I'm excited for everyone to not only hear our first live recording the way you have been hearing fan favorites songs like ‘Patches,’ ‘Yes, I See God,’ and ‘I Should've Called’ the way we perform them live, but also to hear music from shows spanning 30 years with my different band configurations,” said Stephenson. “I’m also hoping people enjoy some of the songs they haven't even heard us do before such as, ‘Rock of Ages,’ ‘Country Side of Heaven,’ and others. I've had the pleasure of making music with some of the best musicians out there and privileged to also call them FRIEND."
Musicians on “Retrospective – LSB Live” include Jason Barie, Kristin Scott Benson, Dustin Benson, Brian Blaylock, Nick Dauphinais, Eddie Faris, Mickey Harris, Kenny Ingram, Colby Laney, Kyle Perkins, Kevin Richardson, Danny Stewart, Matt Wright, Derek Vaden, and features the multi-award-winning talents of Larry Stephenson.
The Larry Stephenson Band has been entertaining audiences for over 30 years including their numerous performances on the Grand Ole Opry, RFD-TV and headlining festivals and concerts across the U.S. and Canada. Stephenson is a Virginia Country Music Hall of Fame member, 5-time Society for The Preservation of Bluegrass Music in America (SPBGMA) Male Vocalist of the Year and SPBGMA Hall of Greats honoree and numerous International Bluegrass Music awards.
The first single release from the album is “Country Side of Heaven (Where the Bluegrass Music Flows).” The entire album is available now to radio programmers at AirPlayDirect.com and available for digital purchase and streaming worldwide at on your favorite music outlet.

Larry Stephenson Band Release New Single Country Side of Heaven (Where The Bluegrass Music Flows)
Nashville, Tenn. (April 27, 2021) – The Larry Stephenson Band is proud to announce the new single release “Country Side of Heaven (Where The Bluegrass Music Flows) is available for purchase and streaming. This is the first single release from the band’s upcoming album “LSB LIVE” to be released later this year.
“Country Side Of Heaven (Where The Bluegrass Music Flows)” was recorded live from the band’s February 23, 2007 concert at the Penny Royal Opera House in Fairview, Ohio. Musicians include Larry Stephenson on lead vocals and mandolin, Kristin Scott Benson on banjo, Dustin Benson on guitar, Jason Barie on fiddle, and Kyle Perkins on bass.
“LSB LIVE” is a compilation of songs recorded live over the past 30 years at the band’s live performances and indoor and outdoor music events from November 25, 1999 through January 31, 2020. Guests include Kenny Ingram, Mickey Harris, Eddie Farris, Danny Stewart, Kevin Richardson, Matt Wright, Derek Vadin, Nick Dauphinias, Colby Laney, and Brian Blaylock.
“You might say I made good use of my quarantine time in March and April 2020 by listening to many hours of live shows. I had never heard some of these recordings,” said Stephenson.
Larry also made use of lockdown time by doing social media videos with this daughter Whysper when the pandemic hit last year. That led to her recording her first album, Fiddlin' A Lilbit Whyspy with her dad that also included guest Steve Thomas. That sweet album was released on February 14, 2021 and is available for streaming and purchase.
For more information on the Larry Stephenson Band, please visit larrystephensonband.com. Radio programmers can download the song at AirPlayDirect.com.