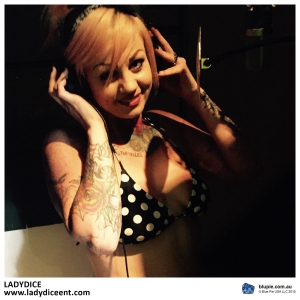 Let the Beast out and roll the dice ...........LadyDice drops her debut album "Beast"
DJ Central artist LadyDice has just dropped her debut album “Beast”. Now available on iTunes, Spotify, Amazon and Deezer, you can take a listen to her tracks featuring A-Guttah in “Stars”, Lyric in “Exile”, Ariez in “Breathe”, Big Mike in “Beast” and DL Downer aka Down3r in “On the Rise”. Already on the rise to becoming an international sensation, LadyDice has used her lyrics to inspire others.

Check out and listen to our personal favourite “Beast” feat. Big Mike! ….the fans are already writing about this great debut the digital ink is still wet so have a read over some of what the fans are saying on itunes, Facebook and Instagram below.

The DJ Central radio and promotion team will be delivering this amazing debut album to the world effective immediately. Check out the links below to get a piece of her music!

Listen to it here:
https://www.youtube.com/watch?v=RB4f_SUEBgg

Throw it up, LadyDice and DL Down3r have produced another lyrical masterpiece
The iconic duo have collaborated again to produce their newest single ‘Throw it up’ which is dedicated to California. ‘Throw it up’ produces a smooth sound complemented with an intense lyrical rhythm and undoubtedly highlights the passion the two artists have for California.

The difference in rapping styles and tone of the two artists successfully supplement each other and creates layers to the song increasing its intensity and catchy vibe.

This song is another club anthem and a devotion to the streets of Los Angeles. It is a sheer representation of the best of Californian rap and is produced with raw emotion and admiration that can be heard through both artists. The song has had over 200,000 views and been virally shared across numerous social platforms.

‘Throw it up’ represents California, its people and the talent it produces.

Listen to it here: