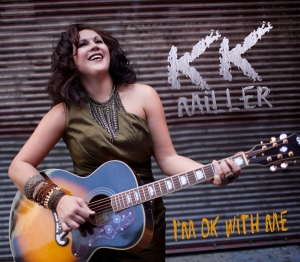 At age eight, KK began singing in the Hundred High School Talent Show in her home town of Hundred, West Virginia. In 2006, Miller went on to win the West Virginia Idol contest sponsored by Morgantown radio station WVAQ. From there she moved to the fourth round of American Idol and faced Paula Abdul, Randy Jackson and Simon Cowell.
Back home, Miller began touring with her very own band “Last Generation”. They opened for Trace Atkins, Trick Pony and Hot Apple Pie.
KK majored in music and voice with a degree from Fairmont State University. She moved to Nashville in 2007 to attend graduate school and further her musical aspirations.
After being in Music City for just under 4 years, Miller has advanced rapidly. Her 2008 debut CD, All Fired Up, has been well received. She has performed frequently around Nashville and the southeast.
Miller’s second album, I’m OK With Me, is now available. “This album is a great mix of everything country music has been, is, and will be, says KK. It has a great songwriter groove with some old country flare! I believe this album has something for everyone.” Most of the songs focus on overcoming hardships and personal pain, which women who are starting families or ready to start families can relate too. They appreciate that her voice and words are sincere and audiences feel they can achieve more personally because of Miller’s inspiration behind her music. With a voice as pure and strong as her West Virginia roots, you can hear that KK has found comfort on this release.
Miller has appeared on the television show, Inside Music Row. The show featured Miller performing live, chatting about her move to Nashville and the progress she has made. There's a lot of excitement in the KK camp! We have some great shows coming up and lots of fun stuff planned!