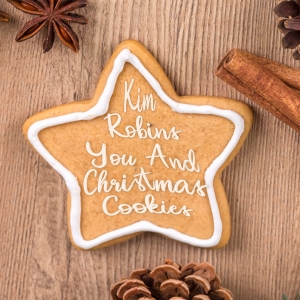 Bluegrass singer Kim Robins is excited for the release of her first holiday tune, “You and Christmas Cookies.” The original song pays homage to the songstress’ Indiana roots, which serves as a major inspiration for recording the track.

Having been around for many years perfecting her craft and unique sound, Robins has performed at countless festivals and venues over the years alongside her world-class band 40 Years Late. Following the release of her first record via Pinecastle Records in 2017, the critically-acclaimed vocalist quickly burst onto the national scene. Raining in Baltimore quickly helped propel the singer/songwriter into the spotlight, and primed for the next chapter of her career.

What People are Saying:

“We should all be so fortunate after waiting forty years.” — Bluegrass Unlimited

“Kim is a real-life songwriter, singer, and seasoned artist. Her band is enthusiastic and the crowd was entertained by their professional sound.” — Ron McCance, McCance Cabin Series

“With her abundant talent and grown-up outlook, hers gives every indication of being a career bluegrass fans will want to follow.” — Jerome Clark, Rambles.NET

“Since Merlefest has often served as a launching pad for rising talent, fans spread the word about new [buzz] bands like Kim Robins and 40 Years Late.” — Merlefest Wrap up Newsletter

“I loved Kim Robin's new project, Raining In Baltimore, from the moment it started. I was mesmerized the entire time it was playing. I just love her voice and the emotion she put into each song. I played it numerous times and found something new and exciting each time I heard it.” — Al Shusterman-KUBU Radio

“It appears that Kim has spent her time not only honing her craft, but also finding her voice and knowing exactly who she is as a singer.” — Prescription Bluegrass
7
What's This
Advertisement