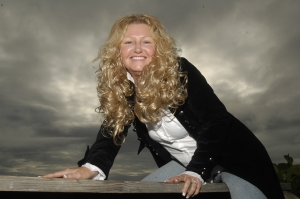 Kimber Jones started singing at 9, in her families band .Her mother was one of the first female lead guitarist in Central Florida . Her father has played bass guitar for many Artist including Frankie Avalon.
She formed her own Top 40's band while in High School . She continued to hone this gift , while completing a Degree in Commercial Arts and Film.
She has worked as a songwriter and Demo singer for a local production company/studio.
Kimber has been influenced by various genres and Artist like Patsy Cline, Aretha Franklin , Celine Dion and Mariah Carey.
In 2003 she felt the "Call Of God " and started writing Christian songs. She is currently completing her Debut Cd . Her pray is that this music will bring Comfort and Peace and that Souls may be converted, in these uncertain times.
4
What's This
Advertisement