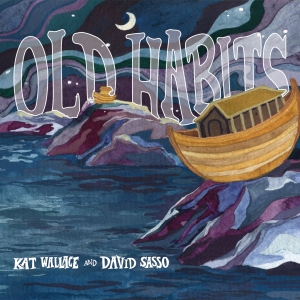 Kat Wallace and David Sasso met playing hard and fast bluegrass with New Haven string band Five 'n Change (formerly Five in the Chamber). Their shared background in classical music and affinity for all things trad brought them together to form an intimate and virtuosic duo. With fiddle and a variety of mandolin-family instruments, Wallace and Sasso orbit around traditional folk, original songwriting, and the ever-evolving boundaries of Americana music. Their effortless vocal lines and innovative harmonies command the stage while allowing space for each song to tell its story. Their debut album, Stuff of Stars, released in 2019 to critical acclaim, paved the way for their highly anticipated sophomore album, "Old Habits," set to release October 1, 2021. Both projects were recorded, mixed, and mastered at Dimension Sound Studios in Boston.

The duo's second album, Old Habits, draws upon Kat and David's classical backgrounds to create inventive arrangements that both capture and extend the aesthetic of traditional song and tune. This album showcases their virtuosity and knowledge of harmony and form, presenting mostly original songs that are at once deeply familiar and assuredly innovative. Evolving from the transparent duo sound of Stuff of Star, Old Habits features a full band, with Brittany Karlson on bass and Ariel Bernstein on drums. The songs reflect on the cyclical nature of life, love, and loss, taking inspiration from the isolation and pain of the past year's pandemic while reaching to find beauty and meaning in the trials and tribulations of the human experience. The album showcases Kat and David's individual and complementary songwriting styles and includes a cast of very special guests showcased on a joyful bluegrass instrumental track entitled "Somes Pond." Old Habits was recorded, mixed, mastered, and produced by Dan Cardinal at Dimension Sound Studios in Boston and is set to release October 1st, 2021.

Kat received a degree in Violin Performance from the Ithaca College School of Music in 2016, where she served as concert mistress of the Ithaca College Chamber Orchestra. During a four year hiatus from higher education, Kat has crossed genres with ease, connecting her with masters of the fiddle. She developed an affinity for original music that has her working and recording with a myriad of successful bands in the area ranging from Country and Bluegrass to Folk and Pop. She's set to return to the academic world to pursue a graduate degree in the Contemporary Improvisation program at New England Conservatory in the fall of 2021.

David completed a Bachelor of Music in Music Composition at the Indiana University Jacobs School of Music, where he recorded two albums as a member of the Pro Arte Singers. Prior to college, David was the youngest composer, at age 16, to have a work premiered by the Indianapolis Symphony Orchestra. In 2003, the Indianapolis Children's Choir premiered David’s full length original opera, The Trio of Minuet, featuring children as the main characters and performers. The opera was broadcast on PBS stations nationwide. David has several pieces for children's choir published and performed around the country. In recent years, he has become increasingly involved in the world of mandolin-family instruments and an active member of the Connecticut traditional music scene. After college, David went on to medical school and now works full-time as a psychiatrist.
5
What's This
Advertisement