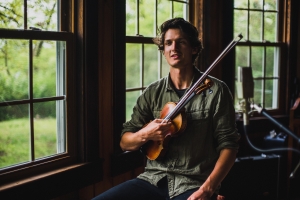 Sprung from the music of southern Appalachia, Julian is a free-spirited violinist who spins deep tone with modern ease. Awarded the 2016 Fresh Grass Fiddle Award and winner of the 2017 RockyGrass fiddle competition, Julian has toured extensively with cellist Ben Sollee and progressive bluegrass outfit Front Country.

Julian spent his childhood surrounded by many iconic acoustic musicians in Asheville NC including fiddler Bobby Hicks – whose smooth and lush sound has had a big impact on Julian’s playing. A recent graduate of Berklee College of Music, Julian has been honored with the 2016 Fletcher Bright Award and Grey Fox Bluegrass Festival’s 2015 Bill Vernon Memorial Scholarship.

Julian is often found, teaching at camps, recording, subbing with artists such as Molly Tuttle and The Stash Band, and has performed at many notable festivals including: Winnipeg and Calgary Folk festivals, Merlefest, Fresh Grass, and Rocky Mountain Folk Festival. Drawn by his love of improvising and the inherent expressiveness of acoustic music, Julian is a nuanced tune-writer and is set to release his debut album of bluegrass inspired instrumentals in May 2019