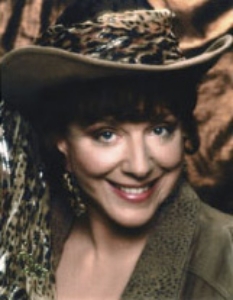 Always singing from her heart, JUDY WELDEN wrings so much feeling from the lyrics of her song that her audience can identify with whatever emotion she's projecting at that moment. The next minute she'll have them roaring with laughter at her quips between songs! Born in PA, later moving to WV, MO, FL and more recently settling in GA, Judy's natural harmony ability comes easily, having started to sing harmony with her family in church at age seven. She has always given the Lord all the glory for the gifts He has given her...... Judy has sung from numerous stages, with her favorite being the Ryman Auditorium in Nashville, original home of the Grand Ole Opry, where she sang on the same show as KITTY WELLS in the mid 90's...... For her 9 1/2 weeks overseas tour the summer of 1998, Judy put together an album of sixteen of her most played songs in an album (JUDY WELDEN COUNTRY HITS - '92 TO '98). She performed at Zevenbergen Festival in Holland and went on to tour in 6 other countries. Her album and songs stayed on the European charts, that included mostly major artists, all summer. Judy released a Christian album titled GRACE in January 2001. The first song on that album, a patriotic duet, (ONE NATION), co-written and sung with PHIL COLEY, from Bowden, GA, was dedicated to the new President of the US and the new Millennium. She received a thank you note from the White House, signed by GEORGE W. BUSH. It became another #1 song for her in March, 2001. Her country album CHASING A DREAM, released in the spring of 2001, also includes ONE NATION and 16 other original songs...... Earlier albums Ms Welden released are SHADES OF BLUE, WOMAN OF THE 90'S (both on TREASURE COAST RECORDS and FOREVER GRATEFUL, on her Christian label, HEARTFELT RECORDS...... In June, 2006, Judy, released a basically blusey 18-song CD, with earlier unreleased songs of that genre, 3 new songs plus songs from prior released albums that had songs which fit the concept. Called PAIN SHY, BLUES & TRIBULATION, it has songs that most everyone can relate to, including 2 Gospel tunes...... Over the years Judy has received many Independent awards and nominations. Her latest awards are: International Female Recording Artist of the Year 1999, Album of the Year, (New Country, 1999), Song of the Year (FISHING FOR A NEW LOVE), co-written with Tom Littleby, American Horizon Award and Co-Writer of the Year, with DJ Mia Heylen and Terrance Alan. In addition...Judy was nominated for 6 awards for the year 2001, including Artist of the 20th Century and Artist/Songwriter of the Year. Her most recent award was being awarded a HALL OF FAME trophy at the CCMA (Colorado Country Music Assn) Award ceremony in June, 2006. Judy was honored mainly for helping so many artist/songwriters get heard on worldwide radio from '93 to '99, publishing their original songs, and also starting the Treasure Coast Songwriter Assn. Her most recent award was "Artist of the Year, 2012" by GCR (Great Country Radio. With over 350 original songs to her credit, Judy has recorded 85 of them and most of those released as singles have charted on the Independent charts, with 14 reaching #1. Those were I'M HITTIN' THE ROAD, LOVE CONQUERS ALL, SHELTER IN THE RAIN and ONE NATION (with co-writers Tina Billias, Tom Littleby and Phil Coley respectively), ABSTAIN, DON'T PLAY THE GAME (co-written with Rhonnie Scheuerman), CHURCH CALLED THE RISEN SON (Judy's lyrics to the public domain tune HOUSE OF THE RISING SUN) WHEN I'M CHASING A DREAM, solely written by Judy; I'M PAIN SHY (co-written with Marc Rabins),YOU ARE THERE FOR ME (Co-written with Tom Littleby), AMAZING GRACE, public domain, GUIDE MY HEART (co-written with Kevin Wicker),COME ON HOME (co-written with Phil Coley) and CONFUSION, WHAT'S THE SOLUTION (co-written with Mia Heylen). Dozens of her original songs have reached top 10 of the Independent charts. Fourteen (14) artists have recorded 32 of her songs...... Dubbed "WONDER WOMAN OF THE 90'S" by her then PR man, the late Gene Bear, after Judy released 10 compilation CDs with multiple artists/songwriters (including her own composed and recorded songs) in a 12 month period, she has since stopped releasing the compilations. Her focus now is on publishing and recording songs written by herself and other songwriters she publishes. Like all Independent artists, she would love to have a major "hit", thus the title of her 2001 release, "CHASING A DREAM". Another goal is to write music for films and/or TV ...... Judy started the TREASURE COAST SONGWRITERS ASSN. (TCSA) in 1993, was the director for 4 years, later serving as Advisor. In 1995 she started FIRP (FAIRNESS IN ROYALTY PAYMENTS) to appeal to BMI and ASCAP concerning equality in royalty payments, requesting that their radio monitoring be updated to modern technology to assure that all songwriters be paid fairly, not just the major ones...... Since early 2003 Judy has been a resident in Gainesville, GA where she continues her musical endeavors. Promoted by Rhon/Bob and On the Vine, & WHP Records, she released 10 songs in 2007, 10 in 2008 & 14 releases in 2009. All of the songs have charted on ROOTS MUSIC Charts (75 weeks). The highest she has gone on the ROOTS MUSIC CHARTS was #3 in GA, #1 in Gospel (where she stayed for a record 18 weeks) and #31 on a worldwide chart that included 2954 artists' songs. Judy was amazed to have been # 1 in two genres (country pop & Crhistian country) for 2 years at the numberonemusic.com site, where she's reached 2 1/2 million plays.
Her latest venture is marketing her patented Bandana Hat (www.bandana-hat.com)...... With a successful career that spans several decades, and having been nominated and accepted for inclusion in International Who's Who In Music and Marquis Who's Who In Entertainment & Who's Who Worldwide, Judy Welden's musical star continues to shine!
2
What's This
Advertisement