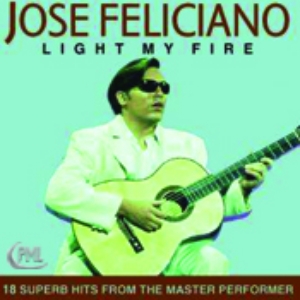 In 1963, after some live performances in pubs and clubs around the USA and Canada, especially in Greenwich Village, New York, and Vancouver, BC, where he played at the same time as Bob Dylan and Joan Baez, he was signed by Jack Somer, an executive at RCA Victor. In 1964, he released his first single, "Everybody Do the Click" (which become a hit in the Philippines, at #2, staying 14 weeks in the TopTen Hit parade). In 1965 and 1966, he released his first albums: The Voice and Guitar of Jose Feliciano and A Bag Full of Soul, two folk-pop-soul albums that showcased his talent on radios across the USA, where he was described as a "10 finger wizard". He was also invited to the 1964 Newport Jazz festival.

In 1966, he went to Mar del Plata, Argentina, to perform at the Festival de Mar del Plata. There, he impressed RCA Victor officials, who asked him to stay and record an album in Spanish. They were not sure what they wanted to record so Feliciano suggested they record bolero music. The result was two smash hits with the singles "Poquita Fe" ("Little Faith", also entitled "Sin Fe", or "Without Faith"), a song written by fellow Puerto Rican Bobby Capó, and "Usted" (the formal version of "you" in Spanish).

A year later, Feliciano was due to perform in the United Kingdom but the authorities would not allow his guide dog into the country unless it was quarantined for six months. The stringent quarantine measures of those days were intended to prevent the spread of rabies. Feliciano later wrote a song entitled "No Dogs Allowed" (becoming a Netherland Top 10 hit on the charts in 1969), which told the story of his first visit to London.

During his British visit, on July 16, 1967, Feliciano gave a live performance on the pirate radio stations Radio 227 and Radio 355, on board the MV Laissez Faire off the British coast less than a month before the stations were due to be closed by the UK's Marine Broadcasting Offences Act. He also guested on a popular British television show with Dusty Springfield and recorded a rare single for UK RCA called "My Foolish Heart / Only Once" which was played on London radio. Earlier, on June 4, 1967, in London's Speakeasy Club, Jimi Hendrix came to the stage and jammed with him.

After two more successful albums, Feliciano, now a household name all over Latin America, moved to Los Angeles. He got together with Rick Jarrard who was, at the time, also producing Harry Nilsson and Jefferson Airplane. They recorded The Doors' song "Light My Fire" in a Latin style and released it as a single, and in the summer of 1968 it reached #3 on the US pop charts with over one million copies sold in the US market alone. The song became a #1 hit in many countries, including Canada, Brazil and the UK and was awarded a gold disc. On the strength of this success, Feliciano won two 1969 Grammy Awards for Best New Artist of the Year and Best Pop Song of the Year, bringing him worldwide recognition as a pop star and stylistic leader because of his 'crossover' from Latino music to English-language pop rock. He is widely recognized as the first virtuoso classical guitarist to bring nylon-string guitars into the pop rock scene.

On October 7, 1968, at the height of protests against the Vietnam War, Feliciano was invited by Detroit Tigers broadcaster Ernie Harwell to perform "The Star-Spangled Banner" at Tiger Stadium in Detroit during Game 5 pre-game ceremonies of the 1968 World Series. His personalised, slow, Latin jazz performance proved highly controversial. In an October 2006 NPR broadcast, he expressed pride at opening the door for later interpretations of the national anthem. His World Series rendition, which features him accompanying himself on an acoustic guitar, was released as a single which charted for five weeks on the Billboard Hot 100, peaking at #50.