John Reischman and the Jaybirds 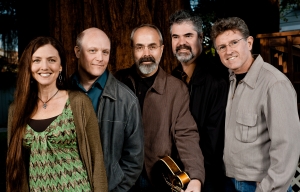 With a fifth critically-acclaimed album and expanded touring schedule, John Reischman and the Jaybirds are a top-flight band delivering a truly fresh blend of original songs and instrumentals, old-time heritage, and bluegrass power.
Featuring nine new songs and tunes from all five founding band members, Stellar Jays is the latest in a series of CDs to win rave reviews for a trademark, old-time-infused bluegrass sound that respects tradition while advancing the music. The nomination of Stellar Jays for two 2007 Canadian Folk Music Awards follows praise such as this from Nashville Public Radio: “A masterpiece — a fascinating and fresh-sounding collection of tunes that incorporate the best elements of bluegrass and old-time into a killer new sound.”

“On the evidence of Stellar Jays, John Reischman and the Jaybirds are in their prime as contemporary bluegrass musicians capable of maintaining and extending the music's legacy,” says Billboard.com. Bluegrass Unlimited magazine describes tone-master and composer John as “one of the world's undisputed masters” of the mandolin, a frequent accolade since his days with the Tony Rice Unit and California's Good Ol' Persons. John went on to record two outstanding solo albums and numerous sessions before forming the Jaybirds in 2001 to release a self-titled debut album, followed by the Canadian Juno-nominated Field Guide, and in 2005, The Road West.

“Though Reischman is the leader and front man, he gives each of them plenty of room to shine, and together they produce music that is seamlessly excellent and rewarding,” Sing Out! magazine says of the superb West Coast ensemble led by John from Vancouver, B.C. “The folks he's playing with are neck and neck with him all the way,” Victory Review magazine says of the original line-up: John on mandolin, Jim Nunally on guitar, Trisha Gagnon on bass, Nick Hornbuckle on banjo, and Greg Spatz on fiddle.

Jim is a San Francisco Bay-area veteran of several decades as a leading guitarist, songwriter and high, lonesome singer. Jim appeared with John on the Grammy-winning CD True Life Blues, The Songs of Bill Monroe, is a producer and session stalwart, and plays select dates with David Grisman. Audiophile Audition describes Jim as “one of the best bluegrass tenors working today,” with equally impressive speed, clarity and tone as a guitar man.

Chilliwack, B.C.-based Trisha is portrayed by SingOut! as “one of the most versatile” and “irresistible” vocalists in bluegrass, her strong and distinctive style ranging from “mournful and plaintive” to “hopeful and yearning.” Trisha anchors what Dirty Linen magazine calls “gorgeous three-part harmonies” and her singing and heart-felt songwriting is complemented by her right-on-the-money bass rhythm.

Nanaimo, B.C.-based Nick has developed his own voice on the five-string banjo, a unique sound with a two-finger roll unlike other contemporary banjo players. “Nick Hornbuckle's banjo can be downright spine-tingling,” wrote the L.A. Daily News. “The resonant yet lively Cleo Belle is just right,” Bluegrass Now says of the prolific instrumental composer's, original Stellar Jays offering.

Spokane, WA-based Greg is hailed as a “world-class bluegrass fiddler” by Fiddler magazine. Another Stellar Jays instrumental composer with the lightning-fast Bash Bish Falls, Greg's “virtuosic playing is flawlessly delivered time after time,” praises Audiophile Audition. His wide-ranging chops have made him a popular West Coast player for years, including stints with the legendary Frank Wakefield, and resophonic guitarist Rob Ickes.

As FolkWax says, John Reischman and the Jaybirds offer “clarity, energy, good ensemble work, classy originals, and an adventurous approach” to the world of bluegrass and folk music — along with engaging stage humour in powerful live shows. They are what SingOut! calls “ thoroughly professional ensemble with a rare ability to produce music that is simultaneously traditional and contemporary . . . the Jaybirds are a band that continues to hit on all cylinders.”