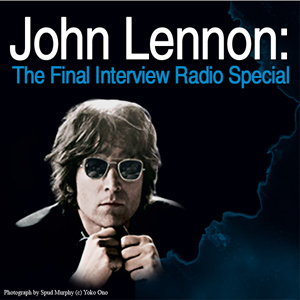 Historic Special Includes the Last Interview Conducted with Lennon on the Day He Died, plus Music from His Solo Career and The Beatles

The 2-hour radio special, which had it’s first airing on December 8th, 2010 commemorating the 30th anniversary of his death, centers on John Lennon’s last radio interview, along with Yoko, recorded at the Dakota in New York City, only hours before Lennon’s death on December 8, 1980. The special is mixed with music from the Lennon’s solo work, the Double Fantasy album, as well as songs from The Beatles.

The original team that conducted the interview (Dave Sholin, Laurie Kaye, Ron Hummel and Bert Keane) came together 30 years later to re-create this historic radio special. Along with highlights from the interview, they relay their own unique memories of that day, including events leading to the interview, meeting Lennon and Yoko Ono, and a curb-side encounter with Mark David Chapman, the deranged killer who gunned down Lennon that night.

“This historic radio event celebrates the life and music of John Lennon, focusing on a truly joyous interview that was conducted as he was beginning a brand-new phase of his career,” says Gary Krantz, President/CEO of Krantz Media Group. “KMG is extremely excited to partner with AirPlay Direct to bring this historic radio special to a wider universe of radio stations worldwide.”

“After learning of the interview late last year, it was clear that this compelling content, given its unique nature and wide appeal, presented great value for listeners and radio stations alike,” states Dan Bowen, WSM-FM Director of Programming and Operations and AirPlay Direct Advisory Board member who secured the content for the digital delivery platform. “The ability of AirPlay Direct to deliver the program worldwide provides a great opportunity to expose this one-of-a-kind special.”

“AirPlay Direct is truly honored to work with Gary Krantz and Krantz Media Group to bring this special to our global radio members,” states Clif Doyal, Executive VP of AirPlay Direct. “John Lennon’s legacy, both as a solo artist and a Beatle, looms large, and his music continues to attract new fans and impact our world long after his untimely passing.”

Earlier this year, ”John Lennon – The Final Interview” Radio Special was released to music consumers worldwide by Krantz Media Group, with approval from Yoko Ono and the Lennon Estate, as an exclusive download on Apple iTunes, on February 8th, 2011.

STARTING OVER
WOMAN
GIRL/ The Beatles

Incue: “We’re back with John Lennon: The Final Interview…”

Incue: ”We’re back with John Lennon: The Final Interview…”

Incue: ”We continue with: John Lennon: The Final Interview…”

Incue: ”We continue with John Lennon: The Final Interview…”

NOBODY TOLD ME
REAL LOVE/ The Beatles