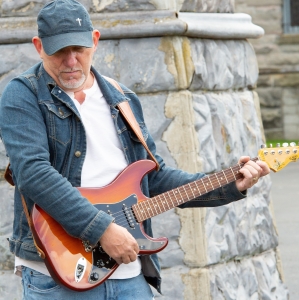 
Joe Richard “a compelling voice, something truly special, both accessible and passionate” Is honored to be releasing his third album, touring internationally, and opened shows for esteemed artists such as Charlie Daniels, David Allen Coe, The Nitty Gritty Dirt Band and more.

Richard's prestige extends beyond the stage as well, He owns and operates a recording studio and is the owner of a music store, Worship leader in his church, and is passionate about helping addicts' find a new path.


Roots, a project from Americana artist Joe Richard, features his song Roots. A song about a man who was raised in church, grew up and lost his way, went to prison, got out and began serving the Lord, and how his life was changed forever.
During a year where COVID-19 stopped the world in its tracks, Joe Richard was in the studio working on his first professionally recorded cd at the Daywind recording studio in Nashville, Tennessee.

“Inspiration for his song writing comes from everywhere ,” explains Richard. “ I can here a melody from the ratel of the pipes on my Harley, to a machine repetitiously working in the distance.”

The project was produced by Rick Swinesburg with co-production by Anthony Johnson. All of the songs were recorded, mixed, and mastered at Daywind Recording Studio in Nashville by Anthony Johnson who has been with the Grad Ole Opry for over 20 years.

Nashville Recording Artist Joe Richard is embarking on a new musical and literary adventure with a collection of songs he wrote that are inspired by his 21 year old son and his lost friends. , A Born Again Country Boy,​ A song that will be released later in the year, is about a young man who was raised poor, but had love and God in his life and is proud to call himself a born again country boy.

I was raised in a home where I was surrounded by musicians. My Father had a country band called James Paul And The Blue Country featuring little Jimmy on the lead guitar (my older brother). His band always had band practice at our house so their instruments were always set up in the sun room. At five years old I began standing behind the drums and started teaching myself beats that I had saw my dad's drummer playing. My dad took notice and bought me a drum set for my sixth birthday. A year later I join my first band called Iron Fist. We played Kiss, Peter Frampton, and stuff of that era. We played Jr. High school dances and that kind of stuff and we weren't bad.

A year later, My brother Jimmy started a group called The Country Kids, the oldest guy in the band was 13 years old. By this time my brother was 12 and a seasoned veteran, with five years of experience playing with dad. The band was an overnight success, we were playing state fairs, and for other large crowds, then one day we grew up.

We played in several bands throughout the years but our greatest success came when I was in high school, The Ramblin Band. We were opening up for large bands like, Charlie Daniels, David Allan Co, Emilio Harris, Tom T. Hall, Ray Stevens, and many others. We were playing in front of thousands of people every month, playing live on television and even sang on a Christmas special. That group broke up and a few years later I gave my heart to the Lord.

I sing solely for God now and absolutely love what I'm doing....
0
What's This
Advertisement