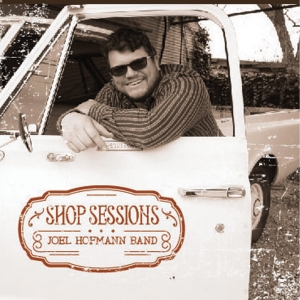 SAN MARCOS, TEXAS – Joel Hofmann crafts personal narratives with an artist's eye (“You'll Have Me to Thank”) and a poet's elegance (“Cut Me Off”). Evidence: The Shop Sessions. The seamless new collection spotlights a rapidly rising songwriter growing exponentially with each track (“April's Fool”). Real life experience maps the landscape. “My beer-drinking, honky-tonk songs are personal experience from owning Riley's Tavern [in Hunter, Texas] for more than a decade,” Hofmann says. “I'm out on the music scene in beer joints and it's just from liking that style of music for so many years.”

Hofmann frequently delivers keen insight with an everyman's grace. “This house has been standing here at least a hundred years,” he sings on “This Old House.” “Its walls have seen most everything that human nature has to give/But what it saw today, it's a wonder it can stand, looking out that kitchen door as you pack our minivan.” The human condition fully framed in a single stanza. “I wrote 'This Old House' in 20 minutes,” the Central Texas resident says. “It's similar to the song George Jones did called 'Bed of Roses,' about a guy who's at home and his wife is dead. They both have a similar feel.”

One thing's certain: The Shop Sessions effortlessly backs traditional country weepers (“80 Proof Heartache”) with sharp narrative songwriting (“The Golden Nugget”) over and again. Hofmann's studio band serves as a key backdrop. “Such a treat for me to get to play on Joel's new recordings,” says his legendary roots-rock pianist Earle Poole Ball (Merle Haggard, Gram Parsons, Johnny Cash). “He has certainly matured as a vocalist and his selection of great songs is perfect for the new CD. So rewarding to feel him putting more of his heart into the performances. A new level of his talent is revealed.”

Such talent delicately splits the line between moving (“Paper Sack”) and grooving (“Lily's White Lies”) and frequently in the same song (“You'll Have Me to Thank”). Listen. You'll hear emotional depth rarely found in honky tonk dance hall shuffles. “I don't know about pain and tragedy like some people do,” Hofmann says. “We've had bad times and people have passed away, but I haven't had such a painful life as some folks do. Some people have these tragic lives they write about like Billy Joe Shaver, but I just relate to it even though I'm not down and out.”

Now, think about country music's core values: family and tradition. The Shop Sessions offers both in spades. “We recorded The Shop Sessions at the Cheatham Street Woodshed here in San Marcos, a building which used to be my grandfather's welding shop,” Hofmann says. “My grandfather started a business as a blacksmith in 1937 or '38 between these walls. He sold paint in the front. When the Finlay family turned it into a studio, I always thought it'd be cool to record in the old shop. I was babysat in this building until I was six or seven, so it's cool that there's a connection there.”

I think of Joel Hofmann like an outlaw in 1880 that traded in his pistols for a guitar. Now he plays HIS music in HIS saloon and you better not mess with him – Mike Harmeier (Mike and the Moonpies)
4
What's This
Advertisement