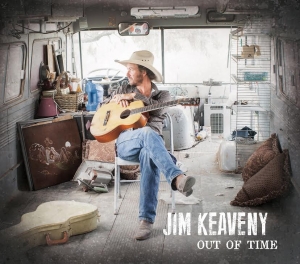 
Jim Keaveny was raised in Bismarck, ND on the Missouri River. In 2nd grade, he began his frst instrument, the piano. Recognizing his propensity for music, his teacher, Mrs. Jean Buck, chose him to represent her students at a University of Mary annual recital.
By 8th grade, Jim’s mother insisted he quit piano or sports, until his declining grades improved. He chose to quit piano because of the strictness of his teacher. Says Jim of this time in his life, “I always hated school. One teacher even suggested they seatbelt me to my desk.”

By his junior year of high school, Jim had discovered a new instrument, the guitar, and started in his first band, The Rogues, with his childhood friends Chris Braun and Mike Dwyer. It was at this time he wrote his first songs.

In 1991, after only a part of a semester of college at the University of North Dakota, Jim decided to educate himself on the road. At age 19, he spent a year and a half hitchhiking and hopping freight trains around the country. He also played a lot of guitar and had picked up the harmonica by then. Many songs were written in these early years and Jim found his voice as a songwriter. Of this time, Jim reminisces, “These were the best years of my life. I met some of my best friends and felt I was finding myself - with like minds, the guitar, the traveling, and the poetry.”

Over the years, Jim has worked a colorful variety of jobs, as a fsherman, a dishwasher, a cook, a tree planter, a firefghter, a janitor, a graveyard maintenance man, and a brewer. He’s also spent about 2 years earning a living busking on the streets in the US and in Europe. In 2005 he was a Kerrville New Folk Finalist at the Kerrville Folk Festival.

In the fall of 2009, following the release of his 4th CD, "Music Man", Jim moved to Terlingua, a small town in far west Texas, where he married his wife, Anna Oakley, a fiddle player. Together, they have spent the last 5 years building an off-the-grid house on 10 acres. In Terlingua Jim and Anna formed a band with Pablo Menudo called the "Rocky Top Alien Breeding Experiment" which focused on traditional Irish tunes as well as old-timey music. Jim also used this medium for his the own material.


 
Jim’s new album, “Out of Time”, to be released in Oct. 2014, was recorded at Frogville Studios in Santa Fe, NM and is his most dynamic record to date bringing in musicans from both Austin, Texas and the Santa Fe/Albuquerque region.

He currently performs in central and West Texas, and tours regularly throughout the states and Europe. He describes himself as a country/folk singer.
7
What's This
Advertisement