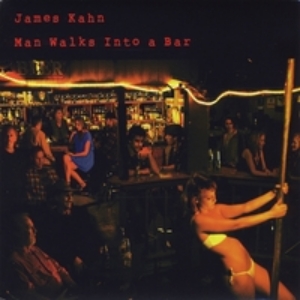 
In this concept album by Emmy-nominated television writer-producer James Kahn, each song is about one of the characters in the bar the night Dolores dances – and how their stories intermingle, finally pulled together in a dramatic conclusion. The tracks span folk, blues, country and bluegrass - each reflecting the nature of the character the song is about. The music video from this CD, Dolores Quits Dancing ( http://youtu.be/Han_ltHBFEw) is award winning - with a Best Shorts Award of Excellence and two Awards of Merit, for best Original Song, Direction, and Music Video, respectively.

BIO
James Kahn's (www.thatjameskahn.com) first career was as an Emergency Room doctor, but his first love has always been writing. He wrote major science fiction novels (World Enough and Time, Time's Dark Laughter), and appeared in E.T. The Extraterrestrial as one of the doctors resuscitating the little alien, which led to his writing a string of novelizations for Spielberg and Lucas (Return of the Jedi, Poltergeist, The Goonies, Indiana Jones and the Temple of Doom). He proceeded to have a long writing-producing career in television, including Melrose Place, Star Trek: Voyager, and Xena: Warrior Princess, to name just a few; and has recently produced a feature film, The Bet. (http://pro.imdb.com/name/nm0434851/) Music has always been close to his heart, but he didn't start taking it seriously as a vocation until a few years ago. Since then he's written and performed two CDs of Americana, and is currently working on a third, of children's songs. His early musical influences came during "the great folk scare of the 60's" - Pete Seeger, The Weavers, The Kingston Trio, Belafonte, and early Dylan, blended with the country sounds of the Louvin Brothers, the Everly Brothers, Doc Watson, and others. These days he identifies most with the sophisticated lyrics of Paul Simon, the harmonies of The Band, and the mellow tones of James Taylor. Kahn thinks of himself primarily as a storyteller. Songs are just one more way of telling a tale, the music anchoring the words with a primal kind of soul.
9
What's This
Advertisement