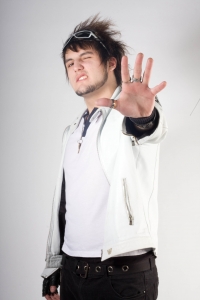 With a unique dynamic in sound, I Alexander's pop rock prowess blends pulsy, driving rhythms with strong melodies and an emotive voice to create distinctive moods throughout his songs. The 6 track EP 'A Little Bit Of Epic' is a polished picture of a persona developed over years of composition and performance.

Influences range from pop giants such as Michael Jackson and Justin Timberlake to alt rock bands such as Paramore, Taking Back Sunday and Saosin, as well as taking inspiration from a plethora of video games and films. After developing a fan base in his local area, Alex took his sound to the next step and put it out across a variety of national and international independent radio stations, from which he received positive feedback and critical acclaim. He shortly afterwards produced a video with filmmaker Ryan Grundy for his track 'Halos & Hypocrites', which is viewable online at youtube.com/ialexandermusic.

October last year saw some label interest and a self organised and promoted headline show at the Ringside in Hull, all filmed and recorded into the desk to be made into promotional videos, which were shortly after uploaded to muzu.tv/ialexander. Since then, I Alexander has been performing regularly and has developed an even stronger live show. With the release of 'A Little Bit Of Epic', mastered by Dan Foster at Element Studios, his music will reach a national audience.

'A LITTLE BIT OF EPIC' EP


"His sound is reminiscent of over produced ’90’s boy bands but without sounding like a soulless twat. Quite the contrary, his songs are from the heart; they’re an original and fresh mix of softer singer-songwriter ballads with electro pop and heavily distorted guitars chugging away in the background." - 4/5, RedHotVelvet.co.uk


The official video for Halos & Hypocrites is viewable on YouTube, MySpace and Facebook. Check it out below:

"He performed his own material, some of it rather spunky and fast, with the occasional ballad thrown in there, including the well received Halo’s And Hypocrites, and not forgetting his Hull Vibe topper, Kittens and Charmers.

A cover of Johnny Cash’s Ring Of Fire was performed, which provoked an electric response from the crowd.

He seemed to occupy the stage excellently, as if a whole band was up there, taking care to interact with the audience and keep the whole thing intimate.

Larkman is clearly a fine example of the fresh talent on Hull’s music scene, so keep an eye out for his name in bigger places in the near future." - Danielle Partis, HullyBugle


"I Alexander creates a sense of wonderment within the audience, some thinking about
the lyrics, others just sitting back and are amazed by
the talent onstage"

"When I saw him play acoustically at Adelphi Club (Hull)
I felt really involved, it was a really cool experience"

"When Alex plays you know he has something important to say and he performs in a way that makes people want to listen.
He is both professional and entertaining when he plays."

"Alex Larkman brings his energy filled recorded tracks to life, with epic technical guitar riffs that fill up a room, to impressively clean high vocals that send a shiver down your spine. He brings a little bit of everything with him, and puts on a great show"

"An able musician and promising songwriter with a great future ahead of him"
- Tom Robinson, BBC Radio 6