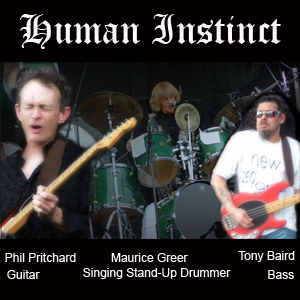 Where do you start with the Human Instinct?
The band was born in the late ‘60s and bred in the glory days of underground rock.

Their current show still features the sensational Maurice Greer standing behind his modified stand-up drum kit, flailing his arms and belting out vocals. It’s grandiose rock at its finest.

The Human Instinct's brand of high-powered Rock is a testimony to the band's pedigree, diversity and professionalism revealing a raw energy and creativity which captivates the audience in a spectactular way.

They have toured the world, playing to capacity crowds in Australia, Singapore, Britain and Tahiti. Members have played with the Rolling Stones and in Britain in the 1960s Human Instinct were support act for the Jeff Beck Band, Small Faces, Moody Blues, Roy Orbison, Spencer Davis Group and Cat Stevens.

Acknowledged globally as a unique influence on rock there have been world wide re-issues of their recordings of singles and albums.

* The Human Instinct is one of NZs longest lasting bands and among the first to foot it alongside the giants of the British Rock scene in the mid 60s.

* The Human Instinct was second billing on the ROLLING STONES 1966 NZ Tour.

* While the Human Instinct was in England (1966-1969) they performed at the Tiles Club, The Marquee and Hugh Heffners Playboy Club. They also toured as support band for:

* In England the Human Instinct recorded 10 singles on the Deram/Decca Label some of which were produced by Mike Hurst.

* The Human Instinct has released 6 Albums and 24 singles.

* Original Human Instinct albums are much sought after and fetch one of the highest prices for collectible albums on the international market.

* On the NZs All Time Top 100 Albums chart the Human Instinct appear at No 14 with Burning Up Years and No. 44 with Stoned Guitar.

* The Human Instinct resurfaced in 2002 for live performances.

* The Human Instinct perform at Pentaport Rock Festival in Korea.

* The Human Instinct perform at special and corporate events.