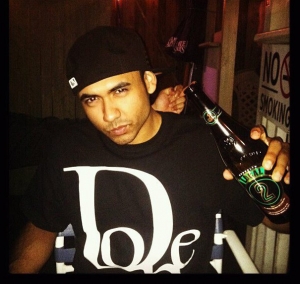 Hailing from the streets of jamaica Queens, New York..H The God has been writing his witty,sadistic, twisted, bizarre rhymes since 2008. Always with a strong penchant for writing, it wasnt until he joined forces with a highschool classmate to create the band "Blunted" that he began to turn his short stories and poems into abstract rhymes. After his bandmate returned to college, H The God joined forced with Super producer "Johnny Blaez" to create the classic ep "NITTY GRITTY" . Followed by the sequel "Nitty Gritty 1.5" After "1.5" was released, H The God went to work on his debut solo EP "Dig Deeper". Even with no official video, no hip hop blog plugs, and no radio play.."Dig Deeper" was an underground classic. Back in the studio with Johnny Blaez in 2012..They are poised to release another classic with their latest work naturally named "2.0" . H The Gods' influences range from Wu Tang Clan to the Beatles. Diverse and unique as you can hear in the music. Join the mailing list and like the facebook page for free goodies, prizes and music!