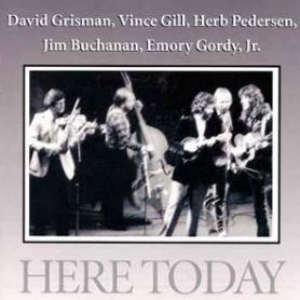 When this album was released in 1982, a number of interesting things were happening or were about to happen to the core members of Here Today. Mandolinist David Grisman had already defined his own style of bluegrass-inflected acoustic jazz that he had dubbed Dawg Music (after his own nickname). He was also on the verge of releasing several increasingly experimental albums. Guitarist and singer Vince Gill had not yet become one of the most popular traditional country singers in the business, but he was about to. Banjoist Herb Pedersen was soon to help found the commercially successful Desert Rose Band with former Byrd Chris Hillman. In short, this album was something of a last fling with traditional bluegrass for all three.

They play and sing as if they know this, covering all the bases: vocal and instrumental barnburners ("I'll Love Nobody but You," "Foggy Mountain Chimes"), lovelorn country weepers ("The Children Are Crying," "Lonesome River"), and gospel ("Going Up Home to Live in Green Pastures"). Every song is a chestnut, and of all the members only Vince Gill has a singing voice really worth hearing, but the raw energy and instrumental prowess each musician brings to the music makes this album a genuine delight from beginning to end.
26
What's This
Advertisement