Hat Check Girl "at 2 in the morning" 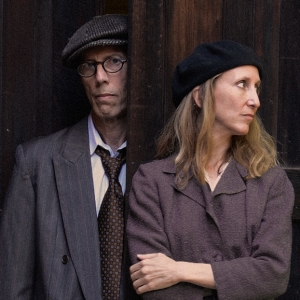 Hat Check Girl, the collaboration between veteran songwriters Annie Gallup and Peter Gallway, began performing as a band in 2009, and released their first CD, Tenderness, in 2010. They were selected as official showcase artists at OCFF conference in Ottawa, Ontario, in 2010, and at the FAR-West (Folk Alliance Region West) conference in Irvine, California in 2011. Their album Goodbye Butterfield placed at #3 on Roots Music Report Contemporary Folk Album Chart in 2014. Their 5th recording, at 2 in the morning, a collection of songs exploring themes of connection, showcases the band’s trademark literate songwriting, spooky ambiance, and hypnotic delivery.
A lifetime’s dedication to her art has made Annie Gallup an icon among people who take songwriting seriously. She has performed throughout North America, including appearances at Winnipeg, Ottawa, Summerfolk and Stan Rogers Folk Festivals and Vancouver Island Music Fest in Canada, as well as concert venues coast to coast, including New York’s fabled Bottom Line. Annie has led songwriting workshops from Whitehorse in the Yukon to the Swannanoa Gathering in Asheville, North Carolina. She was heard on NPR’s All Things Considered in an interview with Noah Adams. Her ten solo albums include Weather (2010), a collection of songs arranged for voice and string quartet, Pearl Street (2006), a concept album of linked story songs, and Ghost (2015).
Peter Gallway emerged from the Greenwich Village scene of the 60’s and had released three albums on Warner/Reprise by the time he was twenty-five. He has subsequently released sixteen CDs on various independent labels and his extensive touring has taken him throughout the U.S., Canada, and Japan. As a producer he’s been involved in over fifty albums and special projects including the Grammy nominated Bleecker Street: Greenwich Village in the ‘60s (Chrissie Hynde, Jonatha Brooke), and Time and Love: The Music of Laura Nyro (Suzanne Vega, Jane Siberry), as well as, recordings for singer-songwriters Laura Nyro, Cliff Eberhardt, and Japan’s Bread and Butter. In 2013 he released Hello Stranger, a reinterpretation of songs written between 1965-70, plus one new original harkening back to Motown music, the bands of the Night Owl Café and the musical coming-of-age of Greenwich Village. He has one published collection of poetry, Big Mercy, and a second collection, Small Prayers, will be published in 2015.