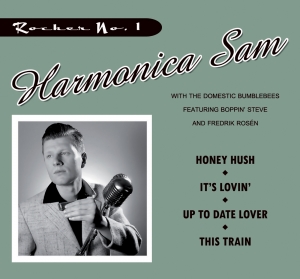 
With this line up what can go wrong? Harmonica Sam with The Domestic Bumblebees reinforced with Fredrik Rosen on guitar and Boppin’ Steve on piano.

When this album was released in 2008 we boldly stated that Harmonica Sam will soon be a well-known name outside of Sweden and that we were bound to see him on the big festivals out there.

Were we right? Yes indeed we were, this album took of like a rocket and Sam toured all over the world, most of the time with The Domestic Bumblebees as his backing band.

Sam eventually went on and formed The Kokomo Kings but nowadays his main focus is on The Country Side Of Harmonica Sam, a fantastic sounding unit as well although in a totally different genre: Country!

Who could have thought back then…