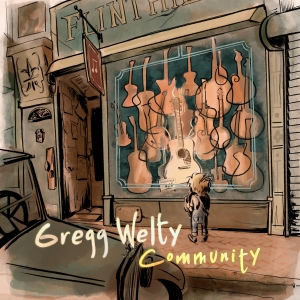 Two New Singles - Gregg Welty - Community
So proud to announce the release of the second and third singles from the upcoming release "Gregg Welty - Community," the largest collaborative bluegrass project ever recorded! This project is the 3 year endeavor of combining the work of 50 artists in 30 different studios from all over the country. While the first single, "I've Endured," released August 1, was a cover of the great mountain song, these next two singles are original, never-before recorded songs! I truly hope you enjoy, "I've Heard This Tune" and "Stonewalls of Heartbreak"

Bluegrass Today
In a lot of ways, Gregg Welty is fairly typical of young bluegrass artists on the rise. The banjo player was born in North Carolina, spent time in college touring with a number of popular bands, and is about to release his second, self-produced album. Where he differs from most up-and-coming pickers is that he is doing all this while also completing his education, where he is training to become a doctor. Like they always say, don’t give up that day job!

Gregg has titled his sophomore project Community, which makes sense when you realize that it features more than 50 different guest artists, recorded over a period of many months in 30 separate studios. Calling on all these friends and icons he has met over the years makes it a true community effort, which Welty says means a great deal to him.

“This project is a commemoration of the bluegrass community, which I am so proud to be a part of. I believe this to be the largest collaborative bluegrass project ever, and I am so proud to finally share this with you after 3 years of putting it together. I think the uniquely-bluegrass phenomenon of walking around a bluegrass festival and getting to jam with your heroes or your best friends you only see once a year is reflected in this project. To me, I think this is what bluegrass music and the bluegrass community is all about.”

Joining him in the studio are many of the musicians he has toured with in recent years, like Tony Wray of Blue Mafia, plus dozens of the top names in our business. Summer Brooke McMahan of the Mountain Faith Band helps with vocals, along with Paul Brewster (Ricky Skaggs & Kentucky Thunder), Steve Gulley, Josh Shilling (Mountain Heart), Jesse Smathers (Lonesome River Band), and Eli Johnston (Doyle Lawson & Quicksilver).

You can purchase the single now from Gregg’s web site, where you can also order Community for October delivery as a download, CD, or on vinyl. Radio programmers can get I’ve Endured now from AirPlay Direct.

Two more singles are expected next month, and we expect you’ll be hearing them on bluegrass radio before long.

First, I want to thank you for everything you do for bluegrass and acoustic music. Thank you for allowing musicians like myself and countless others to share our music with the world. I am so appreciative of your time, effort, and passion for radio and for giving the gift of bluegrass music to countless people over the airwaves. Your efforts do not go unnoticed and I wish more people appreciated the gift that is bluegrass radio. Thank you so much.

Secondly, I want to thank you for helping with the success and playing music from my first album, Memoir, released nearly 3 years ago in August 2015. I would have never thought in a million years that two songs off that album, “Little Bit Lonesome” and “Saro Jane,” would both make the Bluegrass Today charts. I am so thankful for the airplay, support, and help with the success of that project.

Lastly, I want to introduce you to this new project. After releasing Memoir, I often got asked by listeners about how it was recorded. I think they had noticed that there were several different recording studios in the liner notes and wanted to know how that worked, coming together to make a cohesive final product. I think that is how I originally got the idea for this record: “I wonder how many different artists I could get to play on one record. It’d be like a big bluegrass family reunion.” And that was the going title for quite a while! Well, 30 studios, 50 artists, and over 2 years of writing, recording, coordinating…and waiting for people to record their parts…its finally done: What I believe to be the largest collaborative bluegrass project ever recorded! It was an incredibly rewarding experience to bring together artists from all over the country to record this project and I think it was quite unifying and aptly timed. Bluegrass sometimes can feel dichotomous – with traditionalists often pitted against the contemporary players and vice versa. Furthermore, there is a noticeable political divide amongst ‘grassers - or at least I seem to notice one when I scroll through my Facebook. It’s odd I have friends on there that I’ve never met in person, but somehow I know who they voted for! This project went across all those bounds with the simple purpose of celebrating the bluegrass community. I think the uniquely-bluegrass phenomenon of walking around a bluegrass festival and getting to jam with your heroes or your best friends you only see once a year is reflected in this project. To me, I think this is what bluegrass music and the bluegrass community is all about.

Featuring the whole spectrum between GRAMMY award-winning artists and talented festival pickers who’ve never been in a recording studio before, I am so proud for you to be the first to hear the first single off my upcoming project, Community, to be released October 1, 2018. This first single, “I’ve Endured,” is my take on the classic mountain song written by Ola Belle Reed. I feel blessed that my vocal hero Shawn Lane was willing to sing this one on the project. It features:
Lead Vocals – Shawn Lane (Blue Highway) Tenor - Jesse Smathers (The Lonesome River Band; Nothin Fancy, former)
Fiddle - Stephen Burwell (Doyle Lawson & Quicksilver) Bass - Jeff Partin (Mountain Heart; Volume Five, former) Guitar - Josh Hicks Mandolin - Jay Shuler Banjo - Gregg Welty

Thank you again so much for your support and I truly hope you and your listeners enjoy “I’ve Endured” from the upcoming record, Community.

Thank you so much.
God Bless,