Gregg Allman - All My Friends 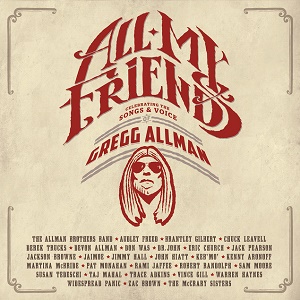 Gregg Allman’s Vast Musical Legacy Is Honored On All My Friends: Celebrating the Songs & Voice of Gregg Allman, Out May 6 on Rounder

On January 10, 2014, a multi-generational assortment of musicians from the worlds of rock, blues and country joined together at Atlanta's historic Fox Theatre for a once-in-a-lifetime all-star performance to pay tribute to the life and music of the legendary singer/musician/songwriter Gregg Allman. That live musical event can now be experienced via the new multimedia package All My Friends: Celebrating the Songs & Voice of Gregg Allman, set for release by Rounder Records on May 6th, 2014

Shot in high definition video with 5:1 Dolby sound, this 1-DVD, 2-CD package (also available in multiple format variations including Blu-Ray) captures the four-hour concert event in its entirety. The show features a diverse assortment of high-profile Allman admirers paying tribute to the iconic veteran rocker, delivering distinctive new performances of classic material drawn from his four and a half decades as a recording artist; encompassing his landmark work with the legendary Allman Brothers Band as well as his parallel solo career.

The variety of the artists paying tribute to Allman, and the diversity of their interpretations of his songs, attests to the broad appeal of Allman's talents, which transcend stylistic and generational boundaries. With musical direction by noted producer/musician Don Was, several of the guest performers are drawn from the Allman Brothers Band's extended musical family, including current ABB guitarists Warren Haynes and Derek Trucks (who also appears here with his wife and frequent musical partner Susan Tedeschi) and Gregg's talented son Devon Allman.

All My Friends: Celebrating the Songs & Voice of Gregg Allman would not be complete without Allman's own authoritative voice, which is spotlighted here on collaborative readings of landmark tunes with Gregg's onetime L.A. roommate Jackson Browne ("These Days," "Melissa"), Vince Gill and Zac Brown ("Midnight Rider") and Taj Mahal ("Statesboro Blues"). Gregg also joins with the Allman Brothers Band to deliver fiery readings of the classics "Dreams" and "Whipping Post," which precede a set-closing "Will the Circle Be Unbroken," performed by the show's full cast. With the recent announcement that the Allman Brothers Band will cease touring at the end of 2014, these may be among the last recordings of the band on stage.

As Allman later enthused, "That show was one of the highlights of my life. It was great to see old friends, and everyone was so gracious and really poured their souls into my songs. It was a very special night."

In most video formats, All My Friends also features extensive bonus video material, including 26 exclusive interviews with the show's performers, candid behind-the-scenes material, and historic footage of a special presentation to Allman.

Gregg Allman is one of rock's most acclaimed and beloved icons, possessing a distinctively soulful voice and singular songwriting ability that resonate through a musical career that spans nearly half a century. Gregg, along with the Allman Brothers Band, was inducted into the Rock and Roll Hall of fame in 1995. At the 54th Annual Grammy Awards in 2012, the group was honored with a Lifetime Achievement Award. The same year, Gregg's critically acclaimed tell-all memoir, My Cross to Bear, spent several weeks as a New York Times Bestseller.