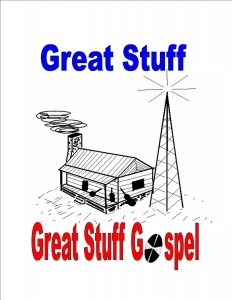 OUR STORY
Great Stuff Gospel began March 4, 2001 on one station in the southern Missouri Ozarks. It proved to be an immediate hit and within a couple of months had expanded to two other stations. About a year later KRWP in Stockton requested a secular bluegrass show and Great Stuff was born. From those beginnings as a local bluegrass network, it has expanded to being carried on over 70 radio stations in 20 states.
Gene Skinner started in radio at the local station in Mansfield, Missouri then spent eight years at country music powerhouse KTTS in Springfield, Missouri honing his craft working overnights. After leaving the Radio Ranch, he spent time in sales including radio advertising sales in the Springfield/Branson area. He has always loved bluegrass and classic country music and remembers spending many nights listening to the Grand Ole Opry. He is currently a member of the International Bluegrass Music Association and serves as a Master of Ceremonies at several bluegrass festivals and IBMA showcases. He and Nancy have been married since 1985 and have two daughters, Melissa and Rebecca. You can contact him at gene@greatstuffradio.com
Rebecca Skinner began picking a song she wanted to hear on each show when she was only nine year old. She has been hooked on bluegrass since seeing Third Tyme Out at one of the Starvy Creek Bluegrass Festivals. She updates listeners each week on the status of her soccer team and other pertinent details of her personal life. She is currently a student at College of the Ozarks in Point Lookout, Missouri. Her email address is rebecca@greatstuffradio.com