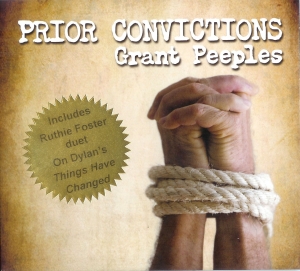 About the title Prior Convictions

In 1991 my friend, Hugh Roche, gave me a book of stories by Dave Hickey, called “Prior Convictions.” Hickey was a friend of Hugh’s brother, Jimmy, the Tallahassee artist whose work and vision were so influential during my formative years.

The book was not the first time I’d heard Hickey’s name. Not hardly. In the early 1970s Hugh had gone with Jimmy to Texas for a rendezvous of artists in Lubbuck, and had come back with a homemade recording of five songs written and recorded by Dave Hickey.

The songs were character-rich, powerful, intelligent, ripped with poetic metaphor; they were witty and melodic and chock full of beautifully phrased assonance and alliteration. And yet they were gritty and gravelly and calloused, too—-the sweetest juxtaposition imaginable.

I’d never heard anything like them in my life. That tape, and those songs (which were never formally recorded by Dave or anyone else) were carved into my creative identity as deeply as any songs ever written. So when I got the book, I tore into it.

The stories were great. Some tender, some brutal. But all were compelling, and wrought with the same nuance and insight into character that had been in those songs I had come to know twenty years earlier. I flipped through the pages in a two-day read. And then I got to the last story.

It was different. And it took a little while before I realized that it wasn’t really a story at all. It wasn’t fiction. But an essay. An explanation about why Dave Hickey wasn’t going to be writing any more stories, that this was it; he was shedding his skin like a snake, while most snakes were just swallowing their tails. For me the essay was like a lucid, rational suicide note. And in effect, that’s exactly what it was.

“It took Hemmingway’s brains spattered all over Idaho,” Dave says in the essay, “and three years of my fretting over them, to awaken me to what I should have known all along—that style and lifestyle were inseperable—that it was all about the swoon, and the triumph of hallucination.” In other words, creation was buried in the past, and there really was nothing left to be revealed that was of any consequence. The dance was done for Dave Hickey. Commentary would be the only choreography left for him.

I felt vertigo. Like a child learning there’s no Santa Claus.

But Dave had moved on. Leaving nothing but the dust on the highway behind. He was turning off amps, unplugging, packing it in. He had found some sort of new ground to plow. A new way to sort through the trash.

Even today when I re-read that essay I get anxious and uneasy and short of breath, and experience that same sort of angst that rises in one’s chest at a funeral, but that is brought on by reflection upon one’s own mortality, rather than that of the dead man’s in the coffin.

It is in tribute to this very angst and uneasiness, anguish and drift, and in honor of the terror that artists around the world have tenderly embraced—-ever since charging bulls were first painted on cave walls in France—that I gratefully assume the title of Dave Hickey’s book for this collection of songs. Primus circumdedesti me

About the songs on Prior Convictions

Gunning for the Buddha. This is a song by the 1980s British pop band, Shriekback. I’ve had the song in my head for thirty years. I deleted one of their verses and wrote a new third verse.

Road to Damascus. I wrote this when I was in my 20’s. Most of the New Testament is a venture through the post-conversion mind of the apostle Paul. This song is a journey into his mind before he was struck blind on the Road to Damascus.

Market Town. A song by the marginally obscure Oregon songwriter, Myshkin. Minie Brattain, who is one of my favorite songwriters on the planet, sang this to me while we were driving to the Kerrville Folk Festival in 2010. It might be the best use of allegory I have ever seen or heard in any work of art.

Sad Naked Woman. I fell into a painting of the same name and came out with this song.

Things Have Changed. My favorite Bob Dylan tune, which I have re-tooled here into a duet. The marvelous Ruthie Foster sings the female part. Click HERE to hear it.

Patriot Act (for Dave Hickey) I recorded this song on my first record. Unlike a lot of older songs, it is still very much with me. The verses’ melody and a few lines are borrowed from a song by Dave Hickey called “Double Die Damn.” I first heard it in 1973. (It has never been officially or formally recorded.) I’ve never looked at a song the same way since.

Last Honest Man (aka Diogenes Blues) A tribute to the philosopher Diogenes, this might be the most defining song on the record. And the most inaccessible. Two lines were incorporated into the song from a lucid and meticulously crafted poem of John Ashbery’s called “Punishing the Myth.”

Pole Dancing to Gospel Hymns What happens when an exotic dancer has to reconcile her newly found faith with her profession? My hope is that the song begs the question: what would, say, a banker or real estate broker do, if they had to do the same? Inspired by the powerful poetess Andrea Gibson, who has a book of poems with the same name.


Last Night I Dreamed In Spanish. It’s been over five years since I left Nicaragua. Maybe it’s my aversion to sentimentality in art that has steered me from ever writing a song about anything that had anything to do with my ten years of living there. But this song is the first crack in the door that opens to that part of my past. I think. Joel Guzman plays button accordion on this. The Spanish bridge is from the poem by the great Cuban poet, Jose Marti, “Arbol de mi Alma.”

**** Lover In 1967 my elementary school in Tallahassee was integrated for the first time. The song is born of a verbatim memory from those days, but that I coupled with siftings from the culture and street sentiment of today.