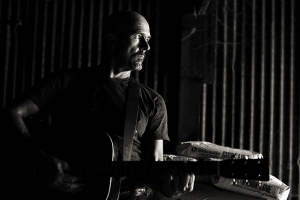 Grant has a unique style he dubs "leftneck." His original songs include environmental, socio-political themes, but poignant love songs and humor, too. Nashville songwriting legend Bobby Braddock dubbed him, "like John Prine, but with a Southern bent."

He was destined to become a songwriter at the age of 16 when he heard Dylan’s “Girl from the North Country.” He went on to drink in the works of classic country artists such as Lefty Frizzel, Guy Clark, and Merle Haggard. What resulted was a voice that Folk and Acoustic Music Exchange calls "laced with Waits, Cash, & Cohen."

His latest release, Prior Convictions, produced by Americana icon Gurf Morlix earned top ratings on national and European Americana/ Roots charts. He has toured both east and west coasts, Texas, and every shore in his home state of Florida, playing at venues that range from concert halls to biker bars to Unitarian church services.

The Americana Gazette says, “Grant Peeples’ Prior Convictions is real as hell, and beautiful to boot…”

His mother finds his songs…disturbing….