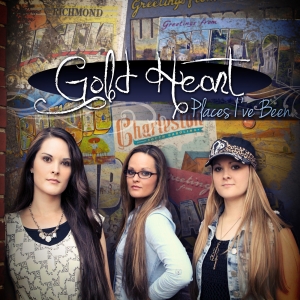 The Gold sisters tour extensively and perform as a quintet with their father, Trent on bass. Along with some of the best banjo players in the business, Gold Heart is thrilled to have their brother, Kai Gold, join them on the banjo.

Highlights include a major International tour of the United Kingdom, performances in 24 US States and multiple appearances in Canada. Gold Heart was invited to perform as a 2009 IBMA (International Bluegrass Music Association) Official Showcase Band in Nashville, Tennessee. Gold Heart has been featured twice on the PBS television program "Song of the Mountains". That program reaches thousands of viewers Nationwide. In 2008, Gold Heart was honored to win 1st place in the Podunk Band Competitionin Connecticut. Most recently, Gold Heart was selected to perform at the 2014 World of Bluegrass Conference on the IBMA Youth Council Stage in Raleigh, North Carolina.

Gold Heart, featuring the Gold sisters Tori (mandolin), Jocey (guitar), and Shelby (fiddle) have been touring world wide and astounding audiences with their fun personalities, intense harmonies and brilliant musicianship since 2005. With nearly ten years on the bluegrass scene, hundreds of live performances and now four albums under their belt, Gold Heart is elated to join Mountain Fever Records. Of the trio, Keith Lawrence of Bluegrass Notes stated, "If angels sing bluegrass, this is what it sounds like."

These young artists are expert songwriters, with Jocey and Shelby contributing the majority of the band’s impressive material. At age fifteen, Jocey was one of three finalists of 983 contestants in the 2008 Chris Austin Songwriters Competition (bluegrass category) at MerleFest. The work of the sisters can be heard on their previous recordings, My Sisters and Me, Never Let Go and Journey to Heaven's Bright Shore.
29
What's This
Advertisement