The Gibson Brothers - In The Ground 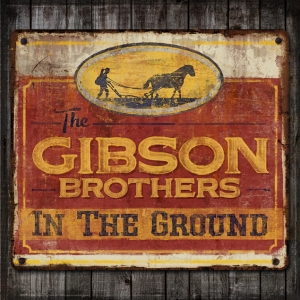 The Gibson Brothers
In The Ground
February 17, 2017

With accolades including the International Bluegrass Music Association’s Entertainer of the Year; Song of the Year; Songwriter of the Year and Album of the Year—in some cases multiple times—the Gibson Brothers truly need no introduction in the bluegrass world. Yet even though they’re "bluegrass superstars" (New York Times), there are still plenty of people outside the worlds of bluegrass and acoustic music who are not yet familiar with their music. For them, In The Ground is the perfect record—just as it is for long-time Gibson Brothers fans, too.

It’s often said that “it all begins with a song.” From the beginning, the Gibsons have been known as "songwriters' songwriters”—and sure enough, In The Ground is all-original, with only two outside co-songwriters; that alone makes it a stunning achievement. And while any new Gibson Brothers album would be big news and cause for excitement, the fact that their most recent album, Brotherhood, was a lovingly historical-minded tribute to the brother duet tradition, underlines how much anticipation there’s been for an album of all-new Gibson Brothers originals.

“I think it shows maturation," says Leigh, the younger of the duo. "I started to see and feel the impact of where we’re from—how it carries into our music, its honesty. We didn't need to turn to anyone else to tell our story for the record."

“'Remember Who You Are’ is what my dad said to me right before I went to college," says older brother Eric, and sure enough, the opening lines of the chorus point straight to his advice: "Some will tell you everything you want to hear, some will make you question all that you hold dear.”
In the same vein, he explains that “Fool's Hill" is "based on an expression I heard my mother and grandmother use about young people getting in trouble. . . 'oh, he's just climbing Fool's Hill.’”

Other songs explore aspects of a musician’s life. “‘Friend of Mine’ began as a song about a guitar," says Leigh. He was gifted a 1940s-era guitar from a friend who passed away. Then, he says, that idea was coupled with the sheer joy of driving down the road with Mike Barber, the band's bass player, who has been with the band for over 23 years. "Little Girl," on the other hand, was a song Eric penned a decade ago, when the possibility of success felt very far away. Yet that sense of stasis is juxtaposed with the album’s quickest tempo, its lyrics speaking to the fear of being stuck, even as the banjo races forward.

On "I Found A Church Today," the brothers return to their churchly roots with a brother harmony that sounds as much like barbershop quartet as it does like bluegrass. "Look Who's Crying Now" is influenced by the Stanley Brothers, 1970s country, and a Levon Helm sort of swamp-waltzy thing, while "Everywhere I Go" is particularly special to Eric, whose guitar- and mandolin-playing son, Kelley, collaborated with his brother and father on the melody and writing.

The title song, "In the Ground," closes out the album, slowing things down with a sparse and contemplative guitar-and-vocal opening that speaks to the end of the family farming era, when men and women could support themselves and their families on the acreage around them. It's also about time moving on and progress being a double-edged sword. Though this is a theme familiar from earlier Gibson Brothers songs, it hasn’t been done better or more powerfully than here, again with the multiple layers of meaning of "In the Ground:” the term, from planting and harvesting, to the heyday and demise of the family farm, to birth and death, ultimately being placed in the ground at the end of it all.

Indeed, In the Ground may be the Gibsons’ most personal album to date, recalling moments from childhood and what it was like to be the last generation of their family to grow up on a dairy farm in northern New York, close to the Canadian border, in a place that felt locked in time. "We are a team,” Eric muses. “We slept in the same room on the farm, slept in the same dorm room at college, and often room together now on the road. I’m proud that whatever Leigh and I have accomplished has been together.” And despite their many career advances, it’s clear that the brothers can still dig deep into the roots of their own musical heritage and indelible memories of parents, home, and loss.

Born on a northern New York dairy farm, they began on banjo and guitar in middle school. Their dad, Kelley, owned a banjo, a fiddle and a guitar, and offered them lessons - under the condition that they not quit. And while they did, indeed, stick to the music firmly planted in farm and family, the brothers expanded outward from there, from the Earl Scruggs lesson book to listening to Don William, to Ricky Skaggs with Emmylou Harris—an important intersection of country and bluegrass—and to the revelatory inspiration of Flatt & Scruggs Live at Carnegie Hall.

From those beginnings, combined with music in church and its emphasis on singing and harmony, the brothers created their own distinctive style of singing and songwriting. "I think there a few things in play here,” Leigh told The Boston Globe in 2015. “The first is genetic, the second is tone. The other part is learned. It's the fact that you grow up in the same household, and you learn to talk with the same people. You pronounce things the same way, you mispronounce things the same way. That tightens things just a little bit." Brother acts, he says, often grew up in simple rural settings like their own. "A lot of our entertainment at home came from playing and figuring out songs."

"Being removed from the rest of the population of bluegrass musicians, there was an individual sound created," he summarizes.

Award-winning bluegrass broadcaster Katy Daly highlights another major part of their impact and appeal: "The music is layered and textured, enhancing the lyrics and bringing the brother-duet tradition into the twenty-first century.” To help in the job, the Brothers have a loyal and virtuosic team of musicians with them. Mike Barber, together with the boys so long he's often called the third Gibson brother, is a 23-year veteran of the band, grounding the duo on bass. Clayton Campbell, outstanding fiddle player, has been providing sensitive back-up and stellar solos for over a decade, and while Jesse Brock is a relative newcomer to the band, he’s a polished veteran who’s earned the IBMA Mandolin Player of the Year award with forceful rhythm and dynamic solos that are by now an integral part of any Gibson Brothers show.

Put it all together and you have the finest record the Gibson Brothers have yet released. In the Ground has everything we've come to expect from this group's sound, with songwriting that continues to mature and deepen over the years, and a vocal and instrumental delivery to match.
In a genre built on the push-pull of progress and nostalgia—a theme often articulated in their original songs and their way of performing them—it stands to reason that this collection serves not only as an essential Gibson Brothers set, but as an authentic new bluegrass classic.