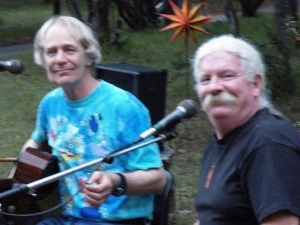 Hello. I'm Georgie Star. I have been an Austin musician since 1966. I started myfirst band when I was 14 years old. We were called The Galaxies. We played at theZilker Hillside Theater Talent Show and won in the vocal group category. The song we won with was terrible, one that my brother and I wrote, but the harmonies were pretty good! We entered a talent show at Leander High School and won for best band.We performed at Hancock Shopping Center and with the checks and gift certificates we received, our moms made our band outfits.

When I got older (16), I worked at Kentucky Fried Chicken (now a bike shop next tothe Jack-in-the-Box at So. Lamar and Barton Springs Road), and I took the leftover chicken and put it in a bucket and ventured over to the Vulcan Gas Company (a San Francisco-type psychedelic-style night club at 316 Congress Avenue) and got in for free. The owners of that club opened the Armadillo World Headquarters where I played in the beer garden because I placed in a songwriters' competition (but I am getting ahead of myself). Back at the Vulcan, I used to go and watch Johnny Winter perform with Papa Red Turner, and Spencer Perskin of the Shiva's HeadBand, the Conqueroo, the Bubble Puppy, and so on.

I met Mark Plummer, and he and I began writing songs with Ricky Cox. We called ourselves Country Sun. Mark and I played acoustic, and Rick played acoustic and electric guitars. We all sang. We added George Nichol on the upright and electric bass. We also incorporated our friend Pat McKern on acoustic and vocals. Pat had been the lead singer for Shepherd's Bush (who won the Austin Aqua Festival Battle of the Bands in 1970 at the Palmer Auditorium), and we would borrow their drummer, Keith Newberry, for some studio sessions. Their lead guitarist, John Staehely went on to play with Spirit, Jo Jo Gunne, Krackerjack, Robert Palmer, and Bob Dylan's Never Ending Band. We started working on an album at General Audio Studios on West 6th Street with Stephen Shields. He later produced Christopher Cross' first album, which went platinum. The studio eventually became Pecan Street Studios. We were the first band to record there. We were doing gigs at Le Potpourri Cafe (now called the Cactus Cafe), the One Knite Club (now called Stubb's) at 801 Red River, and the Hill on the Moon concerts at City Park and Lake Austin, produced by Hill on the Moon Productions. I also played in a band called Livid Blue with Lawrence Vegas and Blind George McClain. Lawrence and I were playing at several high school assemblies to raise money for scholarships. Lawrence's family owned Tony's Tortillas, and we practiced in the warehouse which is now the Dell Children's Museum. Anyway, girlfriends got involved, the bands broke up, and I spent the next six years in the Air Force. While I was enlisted, I played at the Officer and NCO Clubs at Reese AFB, doing a solo thing on the weekends and opening up for the bands.

Let's get to the '80s. I did a duo act with Michael Harkins, and we performed at the original Maggie Mae's. Their venue was strictly Irish folk music, so we went in under the guise of The British Invasion and added electric guitar, harmonica and bass to the ensemble (in other words, we were the first rockers to play at Maggie Mae's). We became a band called The Lawn Boys, and were very happy when we got one of my songs, "#2", aired on rotation at KTXZ radio. Mike and I had the distinction of closing down Ed's Aloe Vera Bar, now the Black Cat on East 6th St., as we were the last act to perform at Ed's bar. The band played at Soap Creek Saloon when Ed started managing the venue. Augie Myers wanted us to open for his band, but Ed said no. Dang it! The band split up, and the bass player, the late David Roe, and I formed as a duo and were playing places like Trudy's Texas Star Cafe, Michael-Michaels, The Austin Outhouse, and Life is a Beach. We were the last performers to play at the Alamo Bar and Grill before they tore it down (The Alamo Hotel). I had a song, "Put the world on Hold", which was being played on KHFI radio and sold all the copies I placed anywhere I could (you know, single 45's), including Inner Sanctum Records. David and I performed on the live radio show at the Austin Opera House with Steven Fromholz.

I moved to Las Vegas with David Roe, and I played in bands in Nevada, Oregon, California and Arizona. I formed the Georgie Star Band and played at casinos in Las Vegas, Henderson, and Stateline, NV. In 1999 I recorded my first solo CD, "Labor Hall". There are 12 songs, and I did all of the tracks (there is no band). It was recorded at Austin Audio Arts on South Congress (formerly next door to the Continental Club). I thought it to be a good effort. My music is kind of like the Beatles, the Byrds, Paul Simon and Bob Dylan all rolled together to create the Georgie Star sound. It's rock-oriented with many love ballads, a little bit of blues and country.