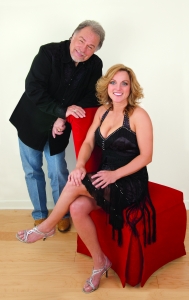 It’s a rare moment; when two artists, from two separate but related genres, find themselves singing together. The sheer challenge of scheduling, has kept many of the greatest vocal combinations from the reality of recording and performing.

It takes much more than a desire to sing together. With the many elements that can prohibit such an endeavor; the fact that two of the greatest voices in country and bluegrass music have created “Your Money and My Good Looks” is an amazing feat.

That fortitude was tested before the two ever met. The first time Gene Watson and Rhonda Vincent sang face to face was on the televised portion of the Grand Ole Opry. A plane delay forced the pair to walk on LIVE TV and sing together; without rehearsal, and without ever meeting each other before that night.

After they sang the first line together, there was an instant moment of magic and admiration. It was apparent that everyone listening was mesmerized by their unique vocal blend, and the two were awe-struck by the sound their voices made when joined in perfect harmony.

Gene Watson and Rhonda Vincent not only have that strong desire to sing together; but the determination to turn that dream into a reality. The end result is a collection of country classics that will restore your faith in true country music.

From the song selection, to the musicians, to the utterly breath-taking blend of the voices; the vision becomes clear why the “King of Country Soul” and the “Queen of Bluegrass” have joined together to create “Your Money and My Good Looks”.

The project is perfection. With 5 exciting new songs, (3 penned by Rhonda Vincent) and 7 of classic country gold. The listener is transformed into
a refreshing new world of classic country music. Traditional sounds with an original delivery; and a carefully placed balance between each of the voices.

The musicians read like a who’s who among Nashville’s coveted studio aces; and all are given their time to shine. Unusual for country music, but part of the normal routine for bluegrass music; which is why this project is a wonderful demonstration of the artist bringing their individuality, along with related musical signatures from both fields.

If you’re one of the few that is new to either artist; each has an impressive list of credentials.

Gene Watson has a tally of 75 charted titles, 23 top-10 hits and six number-one records. He is a member of the Texas Country Music Hall of Fame. Awarded the title of 2010 “Country Music Legend of the Year” from Citadel Media’s Real Country Radio Network. Gene’s radio hits include classics like “Farewell Party,” “Fourteen Carat Mind” and “Love in the Hot Afternoon”.

Gene Watson and Rhonda Vincent are veteran performers. Each maintain a rigorous performance schedule. The popularity of their first duets from Gene Watson’s projects; resulted in requests for a Gene and Rhonda tour; which co-billed Gene Watson & The Farewell Party Band and Rhonda Vincent & The Rage. And now an ALL-DUET album from the finest in traditional country music!

Give your ears the greatest gift it’s heard in years!