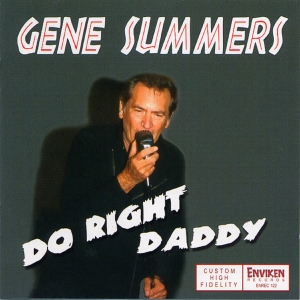 
Gene and his wife Dea arrived at the “Rhythm Rock Party” venue late in the afternoon on Saturday together with The Orbitunes. They left directly after the show on the island of Fårö the previous night, as this was the only chance to catch a ferry back to the mainland. Prior to that The Orbitunes picked up Gene and Dea at the airport on Friday and travelled straight away to Fårö where they arrived just in time to jump on stage and start the show.

Still, they all seemed to be in pretty good shape, although they hardly slept since Friday. They went to the hotel to get some rest (and it must have been a good rest) as Gene performed a stunning show that night, The Orbitunes not to be forgotten. No sign of lack of sleep here! Maybe Gene got an extra injection of energy when his son Steve and a friend, John Nicholson, surprisingly showed up that evening. They took a plane to Sweden and grabbed a taxi from Stockholm to Enviken, a three hour drive, to surprise Gene and Dea!

I talked to Gene about doing some recordings before he came over. He was positive about it so we decided to have a go at it by Monday, as I would be busy wrapping up the weekender all Sunday and Gene would get a well-earned day of rest. As it turned out The Orbitunes were unable to stick around for the session so I gathered some local musicians, including myself.

We entered the studio on Monday around noon, all of us a bit nervous I guess, as we were about to record with “Mr. School Of Rock ‘n Roll” himself. An idol and source of inspiration since long ago, his classic ‘50s recordings are true landmarks in Rock ‘n Roll history. Gene himself seemed to be as calm and relaxed as anyone could be. We didn’t really know what to start with when Gene said he would like to try a song he had on an old 78 rpm at home, a hillbilly track called “Hot Rod Baby”. None of us had ever heard the song before so Gene picked up a guitar and started singing. We went over it a couple of times and then cut it. When we listened to it I realized what a fantastic voice Gene still has. I was blown away ‘cause he didn’t sound a day older than 30!

This set the pace for the rest of the day. Gene played the songs on his guitar and we picked it up from there. If we felt that something didn’t work out we just left it and went on to the next song.

We recorded songs in a variety of styles, two of which are from Gene’s friend Sonny Fisher and some penned by Gene and Dea themselves. We also recorded two tracks that James McClung, Gene’s original guitarist, has written. When we called it a day we thought we’d recorded 10 good tracks, but when I was listening to the session a few weeks later I discovered that it was actually 11 tracks!

The last song we recorded was “Baby Please Tell Me Why”. When recording it we felt that it never came out good but now, with some distance, it sounds great. It may not be perfect but the feeling of it and Gene’s voice makes it. In a way, that’s pretty much what the whole session came to be about: getting a cut with a good feeling and not depending on whether everything turned out perfectly. Isn’t that the true essence of Rock ‘n Roll?

As it turned out Gene Summers is not the only Rock ‘n Roll legend on this record as you can also hear Joey d’Ambrosio of the original Comets play saxophone on two tracks. The Comets did a show in Sweden in the summer of 2003 so I took the chance to ask Joey if he wanted to do these tracks and lucky me, he said yes. Thanks Joey.

As a little bonus you’ll find four tracks by Gene that are scheduled for release by the U.S. label, Seduction Records, in the near future. One of them, “Crazy Cat Corner”, is an original band track recorded in 1958, during the “Nervous” session, to which Gene added vocals in 1998. These four bonus tracks were recorded in 1998 at Yorktown Digital Works and produced by Phil York.

Recorded at Enviken Studios.
Engineered and mixed by: Patrik Staffansson