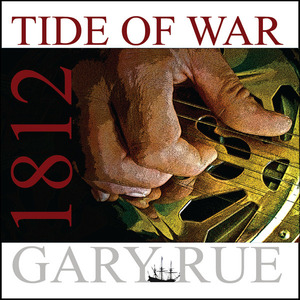 War of 1812 Memorialized by a Maryland Composer and a Chronicler of Maritime History
Lexington Park, MD-- September 27, 2012—A three year celebration of the bicentennial of the War
of 1812 kicked off this summer, and a Maryland Americana musician is offering his own tribute in
song. Musician and composer Gary Rue teamed up for lyrics with Donald G. Shomette, the author of
numerous historical books on the war. In August 2012, they released their new album, 1812 Tide of War.
The CD Release/Debut concert for the new project was a sold out show in Southern Maryland.

Shomette, a former public relations professional is now a leading maritime archeologist who knows a
great deal about the War of 1812. He has led many undersea expeditions off the Delmarva coast and in
the Chesapeake Bay and written the tales, but was initially reluctant to become a songwriter. Gary Rue
had written one song about a historical figure and found the research daunting. Knowing he needed
great stories to make the war come to life, he pursued Shomette about the project in earnest.

Other musicians who lent their talent to the ‘war effort’ were the Naval Academy Band’s bass player
James Fowler, and two artists from the Cosmic Orchestra, cellist, Sue Kuhaneck, and percussionist, Kevin
Stevens.

The 1812 Tide of War album tells the true tales, of a number of individuals whose lives were caught up
in the drama of the final wrenching of the fledgling America from the influence of Great Britain. Among
them, is Charlie Ball, a runaway slave who fought to insure his freedom and his country's independence.

The album introduces us to a number of other colorful characters who suffered through the birth pangs
of our nation. In “Sting Like a Wasp,” we are introduced to brave Commodore Barney who took on the
British Royal Navy with nothing but a mosquito squadron of gunboats. We also meet feisty “Kitty Knight”
who refused to let British troops sack and burn her home, which still stands today. In “Sharpshooters”
we hear about two teenagers, Daniel Wells and Henry McComas, who with their steady aim took out the
British General, a turning point in the battle of North Point. Even a pessimistic preacher from Tangier
Island and the rooster at Fort McHenry are saluted in the songs “Circle of Pines” and “Old Cocky”.

Great moments of the war are recounted, as in the song “1812” which describes the chaotic divisions
in the country at the start of the War. “The Pride of Baltimore” sings the praises of the privateer ship,
Chasseur. The song “City on the Hill” tells of the burning and subsequent rebuilding of the Washington.
The album closes with an instrumental, “The Peace” which pays homage to the signing of the Treaty of
Ghent which ended the war.

Rue and Shomette’s new album 1812 Tide of War can be purchased in either DVD or mp3 format from
their publisher's website, Millstone Landing Productions. A concert tour is planned to bring the war
narrative and album to live audiences. For info, write: manager@millstonelandingproductions.com.