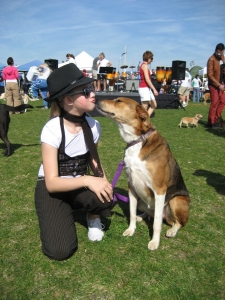 Gari Geiselman 13-year-old Gari Geiselman has been entertaining audiences throughout Southern California since she was five, when she made her first public singing debut at an environmental fundraiser in Ventura County, California. The song was “Born Free” and it was apparent, even at an early age that Gari was born to sing.
However, it wasn’t until February 2008 that producer Larry Ross, after hearing this talented young lady sing, decided to record a six song CD to showcase her vocal abilities. “Her growth as a singer has been exciting to watch and to be a part of. She’s smart, she’s fun to be around, and she works very hard. Combine that with her natural talent, and the universe is the limit. We’ve barely scratched the surface on this one.”
“Pocket Full of Stones”, her first single from the CD Touching the Eiffel Tower zoomed up the indie charts and across the airwaves nationwide. “It was so exciting to know that people all over the country were listening to my music and really liking it,” relates Gari, who has already hit the Top 10 on the Independent Music Network’s Country and Mainstream Charts and was featured on both of their syndicated radio shows. “Music and entertaining are what I want to do for the rest of my life, so this was an amazing step for me.”
Gari, who is an honor student, still finds time to play with her neighborhood friends. She is serious about her career, but still enjoys being a teenager from Southern California. With the soul of a country singer and the performing skills of a pop star, Gari has been called the “perfect combination” of Taylor Swift and Miley Cyrus. “I think that is so cool, because they are both amazingly talented. It would be a ‘dream come true’ to perform my songs onstage with them someday.”