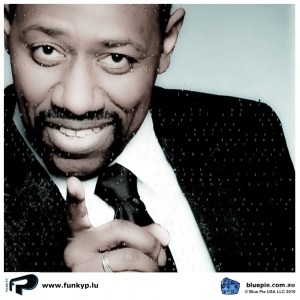 Based in Luxembourg, The Funky P Society is a modern soul-funk band, led by the very charismatic Roosevelt Isaac (aka Funky P). Stylistically, the sound of Funky P combines contemporary production with the popular funk of the past, to tailor some dance-floor anthems for lovers of Jazz. As one music observer comments: “This is heavy, real soul music for the future. This year has been a signature year for Funky P. First of all, forming the production company Funky P SA, then the full album release Get The Funk.”

Brainchild of Marc Reichling, the original incarnation of Funky P formed in 2004 while Marc was touring and recording with several German, French and Luxembourg bands. Inspired by many bands and producers that he met he began nurturing a desire to get into the studio himself. A chance meeting with American singer Roosevelt Isaac gave him the opportunity to start the pursuit of his dream. Isaac and Marc hit it off immediately and he set about forming musicians for the band. There was simply no looking back. From their inception there has always been an emphasis on the live aspect of Funky P and since the completion of the first single Smile Baby in 2006, the band have gone from strength to strength

The past couple of years have been significant for Funky P, who is notably one of the freshest contemporary soul bands out on the European circuit today. Their single Smile Baby is evident of their success, reaching the Number 1 spot on Luxembourg’s largest radio station RTL Hit machine Charts in the Summer of 2006. The same song was later voted as the second most popular hit of 2006 on RTL Luxembourg. In the Summer of 2009 Falling reached the Number 1 spot and remained in the Top 10 on Radio RTL Luxembourg for 13 weeks. The same track reached Number 22 on the Eldoradio Luxembourg Chart breaker. Rewind to 2011, Falling received two international awards from IAIRA for International Chart Placements.

The growing popularity of Funky P is due to the band’s blend of the good old-fashioned song writing of 70s funk with contemporary soul, appealing to a much wider audience. Opening for several star acts such as PINK! (September 2007), Solomon Burke (June 2009) and Joe Cocker (October 2010), Funky P has become a dynamic eight piece. The band has played at a variety of venues, such as the Blues & Jazz Rally Luxembourg (2004), Planet Hollywood Paris (for American Independence Day Celebration 2005), Diekirch750 (supporting CulchaCandela in 2010), Rock-A-Field Festival in Luxembourg (June 2010) and The Kaunas Jazz Festival (April 2011). Funky P have also represented Luxembourg at POPKOMM Berlin (2006) and was chosen as opening act for Maceo Parker in Luxembourg.

Funky P completely outplays any expectations you may have of them. From a musicianship viewpoint they are off the scale, particularly the groove of the guitarist (Cavallini), bass (Reichling) and drummer (Herr). The horn section (Engelhardt, Kuffer and Reuter) are reminiscent of the band Chicago and the Keys (Schaus) are inspired by HerbieHancock. The lead singer (Isaac) obviously has a great relationship with the band (almost telepathic at times.) Their humor and energy are infectious and they seem to love trading off lead vocal lines with horns. Funky P is well on the path to becoming a rare feature, a popular contemporary band. “Real music made by Funky P Society is the dawn of a new era of music.”

Fast-forward to 2011, and Funky P is now signed to Blue Pie Records. Working with Funky P’s talent and charisma, Blue Pie will be digitally distributing all his funk-worthy tracks and albums.

Funky P is well on the path to becoming a rare feature, a popular contemporary “International Soul Band”.. “Real music made by Funky P Society is the dawn of a new era of music.”

Funky P is a Blue Pie Records USA artist and is published by Blue Pie Publishing USA. For more information on Funky P, visit his links below or search up "Funky P" on Google.